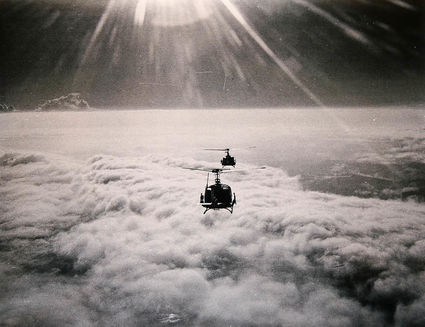 Rick Ferguson flew UH1H Huey D and H models. He took this photo returning to base after a typhoon during his third tour in Vietnam. "We were just goofing off," said Ferguson.

In Part 1, Rick Ferguson joined the Army and became an Airborne Ranger. He was sent for his first tour to Vietnam with the 101st Airborne Division December 1967.

SWAN VALLEY - In December of 1968, Richard "Rick" Ferguson came home for a month. When he returned to Vietnam in January in 1969, he was assigned the position of post liaison officer at Long Binh. For six months he gave the daily briefings to the Post Commander and inspected bunkers.

Ferguson still had dreams of flying. Encouraged by other pilots, he retook his flight physical at Long Binh. He was told his eyes were fine. His reco...