Ferguson gets in on the action

The flying grunt - Part I 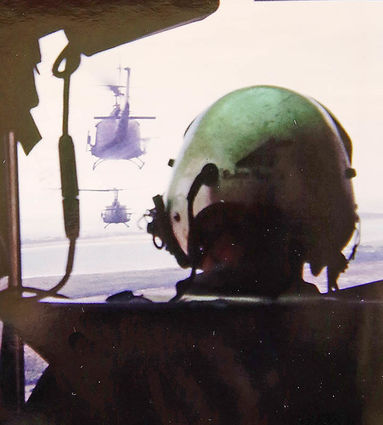 Riding behind the helicopter pilot during his first tour, Ferguson snapped this shot with his old instamatic camera, before being dropped off.

SWAN VALLEY – Army grunt turned helicopter pilot, Swan Valley resident Richard "Rick" Ferguson said his three tours in Vietnam were "just doing his duty." While the loss of 58,000 soldiers in Vietnam, especially those he fought alongside, still haunts him to this day, he said he wouldn't change anything about his life.

Ferguson was 14 years old in 1958 when his father, a pilot in the United States Air Force, was killed while training a South Korean pilot.

Despite that, and despite his mother's protests, Ferguson pursued his aviation dreams. He completed his first solo flight his sophomo...