A connection to the past - Green joins SAR 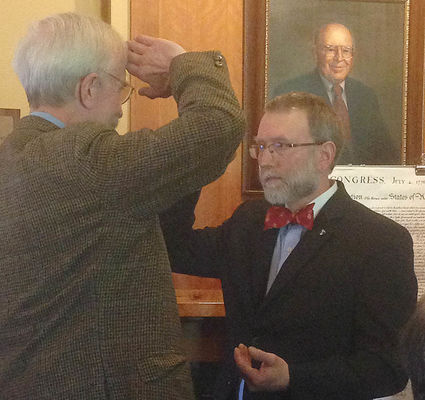 Rob Green (right) salutes Francis Wiegand, secretary of the Liberty Tree Chapter of the Sons of the American Revolution, during his induction ceremony Sept. 18.

MISSOULA – Seeley Lake resident Rob Green is the second in his family to be inducted into the Sons of the American Revolution. Green was drawn to the connectedness he felt within the group and looks forward to contributing and being fed by the other enthusiasts in his constant quest to learn more about history and people.

Green descended from patriot Adam Oberlin. Oberlin was a German-speaking Alsatians who was forced to leave when France took over, or convert. He came to the United States to avoid religious persecution.

Green was invited to his father Robert's installation March 8 as a...