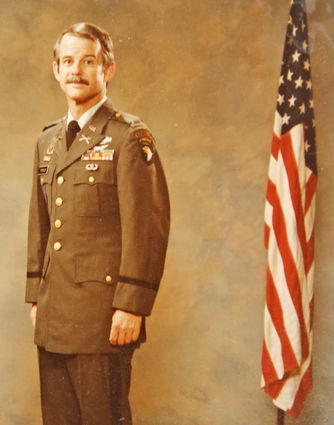 SWAN VALLEY - Our loving husband, father and grandfather, Richard Thomas Ferguson, at the age of 74, entered into eternal rest and joined our Lord Wednesday, Oct. 10. He was born at Drain Airfield in Lakeland, Fla. to Richard Thomas Ferguson, Jr. and Mary Sue Horton, both deceased. His father was in the Air Force serving as a pilot during the war flying out of England. He later flew in Korea and died in an airplane accident after the war. Rick was the oldest of three boys. His brothers Steve Ferguson and Robert Ferguson are both from Lakeland, Fla.

Rick loved to fly. He learned to fly at the ripe ole age of 14 in a piper cub. He also was a skydiver, enjoying this hobby up until his death. He started a jump club at Henderson State College where he attended and received his army commission as a Second Lieutenant through the ROTC program, graduating in 1967 with a BA in Sociology and a minor in Political Science. He then went to Ranger school and joined the 101st Airborne Division and did two Infantry tours in Vietnam and later one flying tour as a helicopter pilot.

He married Polly Callaway from Arkadelphia, Ark. and went through the army helicopter school in Alabama. He was sent to Ft Hood, Texas where he was in the Second Armor Division having to get his flight hours on the weekend. He put in to go back to Vietnam as an aviator and was there the last year of the war.

After returning to the states he decided to get out of the service. He went to training as a flight engineer out of Dallas, Texas and Oakland, Calif. with Sierra Academy of Aeronautics. He later was hired by Bristow Helicopters from Redhill, Surrey England and was sent to the United Arab Emirates to fly to the offshore oil rigs. He and Polly lived there for almost three years.

After coming back to the states, he was employed by Air Logistics out of south Louisiana and later went to work for ERA Helicopters owned by Rowan Companies out of Texas. He did this for over 29 years flying to the oil platforms in the Gulf of Mexico taking crews offshore and also evacuating them during the hurricane season.

His home when he was off from work was Okolona, Ark. where he and Polly had a small farm. They have two daughters Katherine Elizabeth Ferguson from Abbeyville, La. and Bonnie Ann Anderson, from Perryville, Ark., one son-in-law Aaron Anderson and four beautiful granddaughters that he loved dearly Kinley Elizabeth Moore, 15, Kimber Ray Friou, 11, Aida Elizabeth Anderson, 7 and Amelia Jean Anderson, 4. Rick and Polly were married for 48 wonderful years and had a deep love for one another.

Rick had so many interests. After retiring from offshore, he followed his desire to travel west. He came out to Twin Falls, Idaho to base jump off the bridge over the Snake River. On the way back he traveled through Montana and came through the Swan Valley and fell in love with it.

It was summer and his daughter said, "Dad, you need to go there in the winter because you don't like cold weather!" They did and found a piece of land to build their log home. Rick lived in the valley over 13 years and loved every minute of it. He loved to hunt, hike, fish and cross country ski. He never wanted to leave Montana and I knew he had found his place here and only left it once in the 13 years. He was the commander of the American Legion Post #63 in Condon and loved working with the other veterans. Over the last year and a half Rick fought hard against lung cancer. He was a real warrior through it all.

Our family would like to thank Partners in Hospice Care for the loving care they gave him. Memorials in his name may be made to the Condon Community Church in Condon.

There will be a memorial service for Rick Nov. 10, at the Swan Valley School Gymnasium at 1 p.m. If you have a story to tell about him please join his family and share it with us.

Rick was a true patriot. He loved his country and his family. He was my good friend from Henderson and later. Although I hadn’t seen him for several years, I knew he was there for me if I needed him. I am glad he was able to spend his last years in the state he loved. May our loving God give his family peace. Dale Patrick