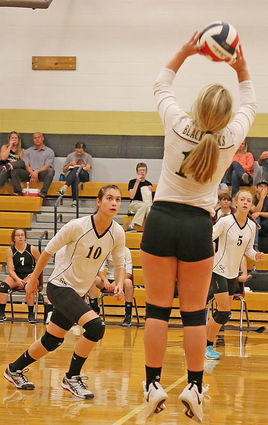 Senior Autumn Morse sets up Klaire Kovatch for a kill in the match against Valley Christian. Morse led the team in assists with 10.

The Seeley-Swan Lady Blackhawks were victorious in their first two conference matches. They defeated Clark Fork on the road Sept. 6 and then Valley Christian at home two days later. The Ladies overall record is now 2-2.

The Lady Blackhawks had 85 digs total with Taylor Dillree racking up 23. Ashley Miller and Autumn Morse also dug into the double digits with 19 and 16 respectively.