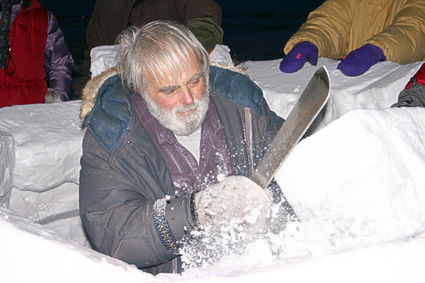 During one of his Arctic field classes in Churchill, Manitoba, Chuck Jonkel demonstrated how to build an igloo.

SEELEY LAKE – More than 100 people crowded into the Seeley Lake Community Hall Thursday, Aug. 30, to view a film celebrating a man acclaimed as the father of bear biology. The documentary "Walking Bear Comes Home, the Life and Work of Chuck Jonkel" was part of the educational Pure Montana Tales series sponsored by Clearwater Resource Council and Blackfoot Challenge.

Jonkel's interaction with bears began in 1959 after he graduated with a Master Degree in Wildlife Biology from the University of Montana and was looking for a job.

In the film, Jonkel relates, "I had two job offers. One was to...