By Zachariah Bryan
The Montana Standard

What gun shops can do to prevent suicide 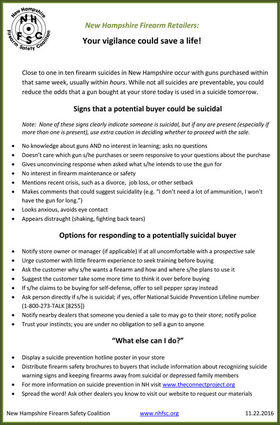 By now, it's a story Ralph Demicco has told a thousand times: Over a period of six days in 2009, three people bought firearms from his gun shop in New Hampshire and shot and killed themselves in a matter of hours.

When he heard the news, there was only one emotion.

Demicco owned Riley's Gun Shop for over 40 years at the time. It was one of the largest, if not the largest in the state, for many years. He prided himself on his store policy: If a salesperson felt uncomfortable selling a gun, for whatever reason, he or she didn't have to.

"We considered ourselves to be...