Part I of II 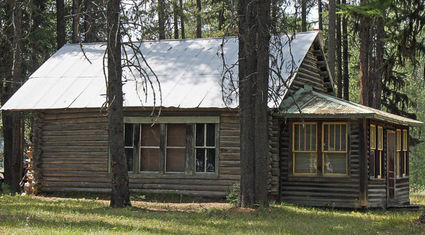 The old Salmon Prairie Schoolhouse has been converted into a residence. The porch area was added on later.

SWAN VALLEY – In 1918, Swan Valley residents built three one-room schoolhouses to accommodate their growing families and the influx of new pioneers. On Aug. 4, 100 years later, the Upper Swan Valley Historical Society invited residents and visitors to tour the valley and see what became of those and subsequent early school buildings. Some were destroyed, some repurposed and some are part of the valleys continuing education story.

Those first three schoolhouses were built near Swan River tributaries: Rumble Creek, Elk Creek and Smith Creek. An all too familiar chore for the older students was hauling water from those creeks. The other familiar chore was hauling wood for the buildings' woods stoves.

Smith Creek student Ed Beck called them Mighty Stoves because they were, "either mighty cold or mighty hot, and burned a mighty lot of firewood and left a mighty lot of ashes and soot."

Both the Rumble Creek and the Elk Creek schools eventually burned down, though memories, records and stories survive. Most notable were tales of recess antics, including winter sledding down steep hills to which snow humps had been added to increase the fun.

Gertie Hollopeter wrote her recollection of a Rumble Creek recess when the students decided to stand, rather than sit, as many kids as they could fit on the toboggan and careen down the sledding hill.

The teacher at Elk Creek School Jessie Larkin boarded with the Brunson family. Her student Alice Brunson said, "She was like a big sister to us."

The Smith Creek School lasted 93 years before it was razed. One of its students, Martha Jacobson, was recognized as one of the top ten grade school scholars in Missoula County. She later earned a teaching certificate and returned to teach in the Swan Valley schools under her married name Mrs. Anderson.

Because of Smith Creek School's iconic status in the Swan Valley, a replica of it was built and moved to the USVHS museum grounds.

The Pine Ridge School, originally located between Barber Creek and Holland Lake Road, was only used for ten years, possibly because of problems with the well. The building was sold to Warner Lundberg for $153. He relocated it on his property, removed the porch and side windows and turned it into a garage.

Records from the Pine Ridge School give a sense of the strict standards many of the one-room schoolhouse teachers adhered to. Allene Armstrong noted in her grade book about one second-grade student who received only a provisional pass grade. "Russel Maloney just wouldn't conform to doing work in a standardized manner and wasted much time. If one can keep him working, he should be able to do 3 grade work."

The Smith Flats School was located in back of what is now the Condon Work Center. Its first teacher was Alice Brunson, herself a graduate of the Elk Creek Schoolhouse. Though the building has since been razed, the foundation stones are still visible and cousins Gene Miller and Nathan Kauffman, both former students, were at the site to share their school days memories with USVHS visitors.

Miller, who started first grade at Smith Flats School in 1942, recalled that teacher Florence Holmes picked up all the students in her car each school day.

In the "100 Years of Learning" booklet Sharon Lamar compiled about the one-room schoolhouses, Lamar elaborated, "When the roads were muddy, she [Holmes] used two cars to get to the school. She picked up students along the way, drove to a legendary mudhole in the old Swan Valley road, where everyone got out, walked around the mudhole, loaded into the second car, and continued on to school."

Young Miller apparently took all that in stride. What excited him happened when he was in third grade and residents Tom and Viola Rickets had inherited the job of picking up all the kids and delivering them to school. Having endured the perils of the road the previous year, the Rickets bought a Dodge Power Wagon, which was a civilian version of the WWII military trucks.

Miller said, "Oh my gosh! We thought it was so great, because it took two steps to get into it. We thought we had a real bus!"

Miller also pointed out to visitors the playground "facilities" at Smith Flats School: the baseball area; a tree with spikes in it for climbing; a log chinning post and two chain swings rigged from a log pole placed between two pine trees.

Kauffman recalled going to school earlier than everyone else in order to start up the fire and catch the packrats. He got paid five dollars a month, which he considered "big money."

Though early teachers often boarded with a nearby family during the school year, teacherages were later built on some of the school grounds, including Smith Flats.

Miller said during WWII many families moved out of the valley and school enrollment dropped drastically. However, after the war, logging and milling increased in Swan Valley and enrollment burgeoned.

In Miller's words, "We went from seven or eight students to about 30 students in one year. Eight grades, 30 kids, in one itty-bitty room. It was shoulder to shoulder."

At one point, the teacherage was converted into a classroom.

Since many of the children were from families whose fathers worked at the Gordon Ranch and its new Wineglass Sawmill, in 1947 a one-room schoolhouse was built near the mill.

The valley's population continued to grow and by 1954 the Wineglass School had 24 students who were sitting two to a desk. The Board of Health declared the building "severely overcrowded." To comply with health standards, the Smith Flat teacherage was again called into service as a classroom and all sixth-through-eighth-grade students were sent to that location.

In 1955 a bond fund was approved and in January of 1957 the new, multi-room Swan Valley School consolidated the students from the Smith Flats and Wineglass schools into one building. The Smith Flats teacherage was moved to the new location and resumed its original purpose as teacher housing. Lamar said she and her husband Steve lived in the teacherage in 1978, the first year she taught at SVS. She believes she was the last teacher to live there. The building subsequently was used as a kindergarten and is presently in use as the school's music room. In 1958, the Wineglass School was moved to the location and attached to the main structure. It now serves as the school library. 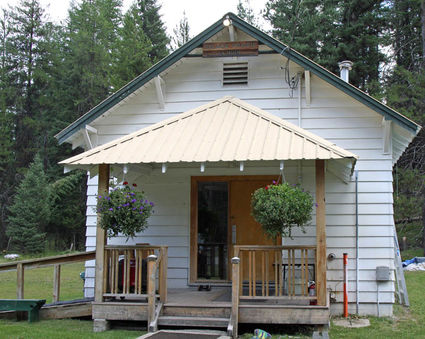 Though 63 years old, this building is still often referred to as the "new" Salmon Prairie School. Its other nickname is "the White House."

At about the same time Swan Valley School first received bond approval, the Salmon Prairie School felt the need for a new building. No longer a log cabin, the new Salmon Prairie School had a more modern look, but it was still a one-room schoolhouse where all eight grade levels were taught at the same time. The new school was built nearby. The old school was moved a short distance across the road.

In a school assignment, former Salmon Prairie student Charleen Kesterson wrote, "The old school was traded to a logger [her grandfather Buck Kesterson] for a flagpole that was put in the school yard."

Both flagpole and school are still in service today, making the Salmon Prairie School one of the few remaining one-room schools in Montana. Some families can count three and four generations of children who have attended and/or graduated from the school.

Next week Part II: The program on the museum grounds following the self-guided tour: what a day was like in a one-room schoolhouse and observations on the value of multi-age-level education.