Starting the Conversation – Offering a Glimmer of Hope 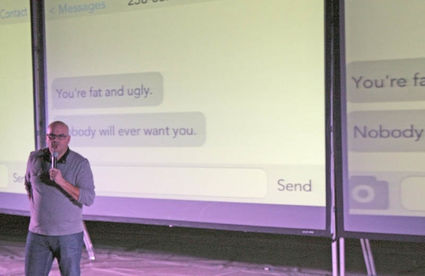 Backed by screens showing bullying text messages sent to his daughter, Director of "Say Something" Jody Dyess tells those at the assembly at Seeley Lake Elementary how the messages eventually led her to attempt suicide.

SEELEY LAKE - When Seppa Francis was six years old, her father suffered a traumatic brain injury from a motorcycle accident.

Francis and her younger brother blamed themselves for years and Francis's anger grew. Along with the emotional stress, the family experienced significant financial loss after the accident.

Francis felt bullied in school and her younger brother watched as a classmate repeatedly bullied others with no lasting repercussions. While the family reached out for help through counselors and therapists, the lack of true connection left Francis's mother Lora Treat heartbroken fo...