Flying by the Seat of His Pants 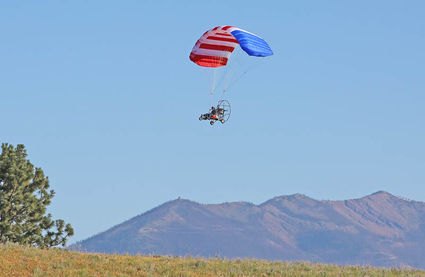 Rob Henrekin flying in his powered parachute the morning of July 12. Being a resident of Kozy Korner since 1985, he loves the opportunity to experience the country he loves from the air. He said nearly every time he flies near the Blackfoot-Clearwater Game Range, he sees an elk cow and calf nursery herd. "They don't care," said Henrekin. "Stuff like that is so cool to see."

bWOODWORTH – "Clear prop," said Rob Henrekin as he pulled his Kawasaki 440 engine to life on his powered parachute. The morning was cool July 12 as the sun rose above the mountains. Henrekin put on his helmet, strapped himself in and in less than 15 seconds was air borne.

"This country is just fascinating to me. The part that is the most fun is flying over this country during a beautiful morning like this," said Henrekin who has lived on Woodworth Road since 1985. "Even though it is a motor, it is so peaceful to be up there by yourself floating around. I just love it."