CRC Celebration Is a Hoot 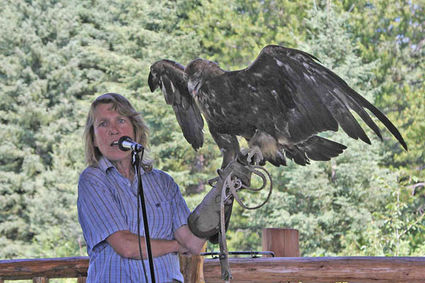 Kate Davis of Raptors of the Rockies holds Nigel the golden eagle for her presentation at Celebrate the Clearwater on Sunday, July 15. Even though golden eagles are very shy birds, they are the apex predator of all raptors in Montana.

SEELEY LAKE - The Clearwater Resource Council held their annual Celebrate the Clearwater community event Sunday, July 15. The celebration included a presentation of awards, the naming of a new executive director and a presentation by Kate Davis of Raptors of the Rockies.

"We do enjoy getting together every year with everybody, having time to mingle and have some food and some interesting programs," said CRC president Jon Haufler.

In his opening announcements, Haufler told the crowd the CRC had a very productive year. Its efforts to prevent the spread of aquatic invasive species, efforts to reduce hazard fuels on private property to protect them from fire and their stream and lake monitoring program have all grown in the past year.

"We've had a number of streams that were included in the Rice Ridge and the Liberty fires last summer so here we have an opportunity to do pre-fire and post-fire monitoring of those streams," Haufler said. "It's not exactly the way we planned it but it's a great opportunity to see how fire is affecting our streams and potentially our lake quality."

Haufler also announced that the board of directors selected Dave Batchelder to be CRC's new executive director.

Volunteer David Wallenburn was recognized with a Dragonfly Award for his help with CRC's aquatic programs. Clyde and Shirley Sterling also received Dragonfly Awards for their contributions to the Adopt-a-Lake monitoring program. 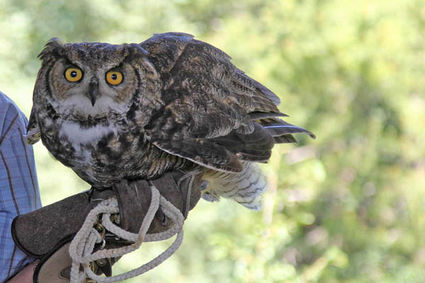 Jillian is a great horned owl that was rescued after she was hit by a car. Great horned owls have a very loose attachment between their skull and spinal cord, which allows them to turn their heads about 270 degrees.

The Raptors of the Rockies presentation by Kate Davis included a saw whet owl named Owen, Davis's own peregrine falcon Sibley, a golden eagle named Nigel and a great horned owl named Jillian. Davis cares for birds that have been injured too severely to be release back into the wild and uses them as educational ambassadors to teach communities about birds of prey.

Davis shared information with the audience on how the 4,000-year-old sport of falconry works. Davis adopted Sibley when she was a very small chick. This caused her to imprint on Davis, thinking Davis was her "mom."

Then Davis described a typical hunting session with Sibley.

"Starting Sept. 1, I put a transmitter on each leg and a bell on one leg and I put her up on my arm and up she goes," Davis said. "Once she has [hunted] her duck, I gotta find her."

Davis also showed the audience how to hoot like Jillian, the great horned owl, and made them promise to go outside and try to call an owl by hooting.

"That's what we want in Raptors of the Rockies," Davis said. "It would be nice if [all the kids] voted correctly and became conservationists and helped CRC and did all this great work but basically we just want them to go outside."