What Happened to Sarah? 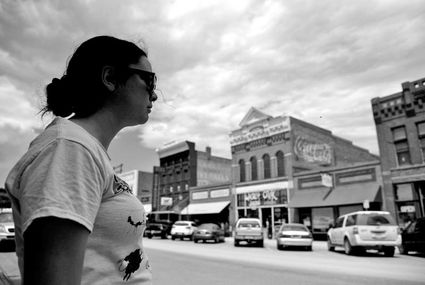 Sarah sat in her Livingston home with the front door locked and her eyes closed, picturing the path to Gallatin Mental Health Center in Bozeman for day treatment. It's 26 miles, across a pass, with strangers at the end of the trip - too far, for someone who struggled to imagine walking around the block.

Her dark hair faded with grey lines, Sarah has dissociative disorder. That means she lives with episodes that steal reality, creating people who aren't there and stalling her sense of time.

"I'm suicidal, anxious, I panic," she said, gripping the fabric of her dress. "When I start thinking about things, my mind goes where it shouldn't."

Before this spring, Sarah received treatment at Livingston Mental Health Center - until she and 100-plus clients got a letter announcing the center was closing following a round of state budget cuts. Instead of making the trip to Bozeman to get help from the center there, she stayed home alone. Wanting to feel "normal," she stopped taking her medication.

"I'm scared of people and different places," said Sarah, who wanted her true name kept private as she continues treatment. "Bozeman was never an option."

Instead, her mind draped the world outside her home where she lives alone with characters of terror. Eventually, she dialed a familiar number - the national suicide hotline. Then she waited for police to take her to the emergency room.

For Sarah - one of an estimated 42,600 Montanans who have a serious mental illness - the state's network of mental health services is a lifeline to what's outside her home when her thoughts begin to race.

But as budget cuts ripple through state health care programs - the latest in a series of up and down swings - many worry about where the system is heading and what its fate means for people like Sarah across the state.

Montana has historically plugged more money into mental health on a per capita basis than most of its neighbors. It's also tended to rank below many of the states it outspends when it comes to measures like suicide rates or residents' ability to get the services they need.

There's a broad sense across state leaders, providers and clients that something needs to change. And people across the mental health system say it makes sense to invest in services that help Montanans before they land in emergency rooms or jails - something state officials say they've only had money for recently, as a result of the state's 2016 Medicaid expansion.

"We need to be focused on prevention and early intervention wherever we can," said Zoe Barnard, the top mental health official with the Montana Department of Public Health and Human Services.

"It needs to be generally acknowledged that recovery from mental illness and substance use disorder is possible, and that with the right support people can live happy and productive lives," she said.

What's less clear: How exactly Montana can get there.

Over the past year, most of the news about mental health in Montana has been focused on a wave of budget cuts like the mental health center closure in Livingston - the consequence of legislators and state officials trying to resolve a major revenue shortfall by squeezing health and human service programs.

However, Montana has historically been something of a big spender on mental health, children's services in particular.

The state spent $249 million on state mental health services during the 2014-15 fiscal year, according to data compiled by the U.S. Substance Abuse and Mental Health Services Administration. That's equivalent to $241 per resident, the seventh-most of any state in the nation and well above neighbor states like Wyoming, Idaho and the Dakotas. North Dakota's 2014-15 spending figure, for example, was $94 per capita.

Montana's primary response to mental illness was once housing patients at the state hospital in Warm Springs. The deinstitutionalization movement of the 60s and 70s saw the state shift toward providing all but the most severely ill patients services in their home communities. In practice today, that means most of Montana's publicly supported mental health care is delivered through a fee-for-service model, where private community providers offer crisis intervention or counseling and then bill the state health department.

In turn, most of the mental health money doled out by the state comes from the federally funded Medicaid program, which exists to provide health care services to low-income Americans. Missoula-based nonprofit Western Montana Mental Health, for example, funded $27 million of its $40 million budget through Medicaid in 2016, according to its annual audit report.

Montana's mental health budget also grew substantially over the decade before 2015, the most recent year where the federal government has published financial data. The number of Montanans served by it also increased, reaching 42,000 people in 2015. That puts Montana's usage rate for state mental health services at more than twice the national figure - and 3.5 times the national rate for kids and teens. 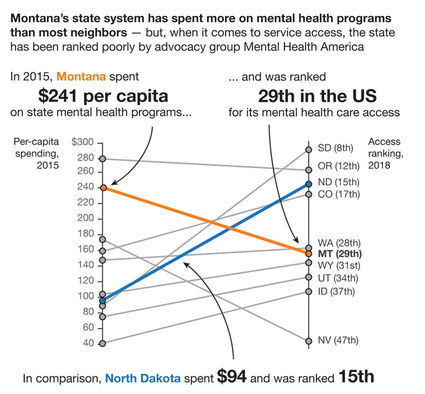 Even so, advocacy group Mental Health America has consistently scored Montana poorly for mental health care access - a measurement it bases on insurance coverage and how many people with mental disorders go untreated. The group's most recent scoring, using data collected before Montana's 2016 Medicaid expansion, ranks the state 29th in the nation for access. North Dakota, despite spending less than half as much per resident on its mental health system, comes in at 15th.

Federal data also points to gaps in the state's mental health system. Just over half of adult mental health clients surveyed about their treatment in Montana in 2015 said it helped them do better in their day-to-day lives, compared to three-quarters of clients nationally.

And as it has for more than 40 years, the state's suicide rate remains among the highest in the nation. Between January 2014 and March 2016 alone, Montana lost 555 people to suicide, according to a report by a state task force - 84 of them younger than 25.

Up next: Part 2: The budget roller coaster and Part 3: 'What is the strategy?'