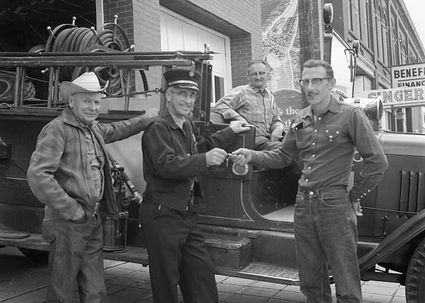 Courtesty of The Daily Inter Lake

Kalispell Fire Chief Charles Tillson, second from left, hands the keys for the 1929 GMC to Rod Copenhaver June 9, 1967 after the fire engine's last shift with the Kalispell Fire Department. Sitting in the driver's seat is Dan Cainan. Jim Sullivan is on the far left.

The 1929 GMC fire engine, known in Seeley as the 1929 Buick, was purchased from the city of Kalispell in the spring of 1967. The Seeley Lake Volunteer Firefighter Foundation still owns the engine - a mainstay at the Fire Department events and during the Seeley Lake's Fourth of July parade.