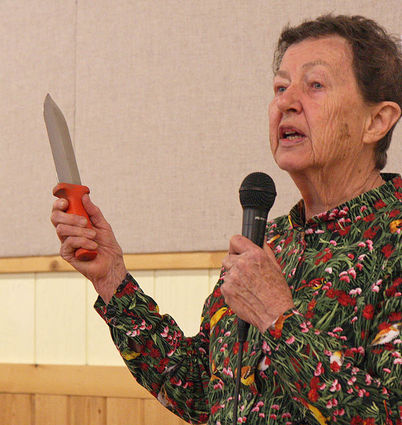 Q: Even though I knew better, I planted my potatoes only two inches deep. Should I pile dirt around them to protect them?

A: To protect the developing potatoes from growing at the surface and being exposed to light, yes. As you know, if daylight reaches the surface of potatoes, they will turn green and taste bitter. Even more important, piling dirt around the stems will increase the size of your harvest. Since no potato can grow deeper than the seed potato which was planted, your plants can produce very few new potatoes in the two inches of dirt available to them.

I would start building mounds right away, trying to add about two inches more space where the underground stems can create potatoes. You are safe in piling dirt around the plant stems up to the height of the first leaves. Then, if possible, spread the mounds sideways as far from the stems as you think potatoes are likely to grow. That will make more space for growing new potatoes. This is still early enough in summer that potato plants can continue making new stolons, the underground stems with potatoes at their ends.

When you are digging dirt to pile around the plants, be sure to stay several inches away from the stem. Potato roots are shallow and easily damaged.

Q: We have an old asparagus bed which we are replacing but what can we do with the soil from the old bed? It is full of quackgrass. Is there any way to remove the grass? Can we "cook" it to death? Is it safe to put the soil in a compost pile?

A: You certainly will want to be sure that the soil is free of quackgrass before planting more vegetables but there is more than one way to skin that cat. If you can let the old asparagus bed remain empty for a year, you can kill the quackgrass and any other weeds growing there. A year from now it will be safe to plant whatever you like in that bed.

It is theoretically possible to "cook" quackgrass by moistening the dirt and covering it tightly with clear plastic for the summer. That method, usually called solarizing, uses the sun to heat the soil enough to kill all living things in the top few inches. However, I have found solarizing to work better in theory than in practice. It may be more efficient in a hotter climate; for me it killed only some weeds.

I prefer to remove weeds the opposite way--to eliminate all light for a year. That kills all green plants, which run out of the energy from photosynthesis and die. I cover the area with a layer of corrugated cardboard or with newspaper at least eight sheets thick. I could use black plastic instead, but it is ugly and it does not decay into soil, as paper does. After a year of darkness even quackgrass rhizomes have died. Be aware that this method does not kill weed seeds. Some buried ones may come to the surface and sprout next year, but at least new seeds will not be blowing in and sprouting while the bed is covered.

If you want to replant the bed this summer, you will need to dig at least one shovel deep and sort through the turned soil for quackgrass roots. Because even a one-inch section of root and its bud can grow into a new plant, careful sifting of the soil will be critical.

There would be no problem in composting all the soil from the old bed. Some of the quackgrass may begin to grow again in the pile, but what compost pile does not grow weeds to pull out subsequently? By the time that the compost goes back to a garden bed, the quackgrass will have been pulled from the pile.

Since you have learned the painful outcome of grass in an asparagus bed, I recommend slowing its invasion the next time around. Be sure that your new asparagus bed is surrounded by at least a foot of grass-free soil.

Master gardener Molly Hackett's motto is "Never trust a gardener with clean fingernails." She shares her gardening expertise in her "Dirty Fingernails" column in the first issue of the month. She welcomes reader questions related to gardening, pest management, plants, soils and anything in between. Those of general interest will appear in the column. Please submit your questions to her via email to mhackett@centric.net, call 406-961-4614 or mail questions to 1384 Meridian Road, Victor, MT 59875.