Taking Houses Out of the Wildfire Equation 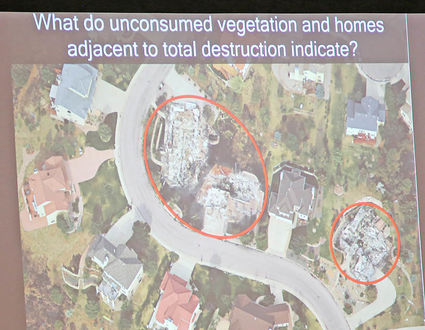 Through various photographs, Dr. Jack Cohen showed how homes that burned in a wildfire did not burn because of a "tsunami of flame," "dragon of fire" or even because the vegetation around them was burning. This photo shows there is still green vegetation around homes that survived the fire as well as those that were totally destroyed.

SEELEY LAKE – After three weeks of Sprague Fire burning around Glacier National Park, it reached the Sperry Chalet complex Aug. 31, 2017. In the final report issued by the National Park Service June 21, it was determined that despite the best efforts of firefighters to protect all the structures at Sperry Chalet, an ember entered the dormitory near a second story window and ignited the wooden portion of the structure.

In a press release, Secretary of the Interior Ryan Zinke applauded the firefighters efforts to save the chalet. "Still, the size and scope of the Sprague Fire reminds us th...