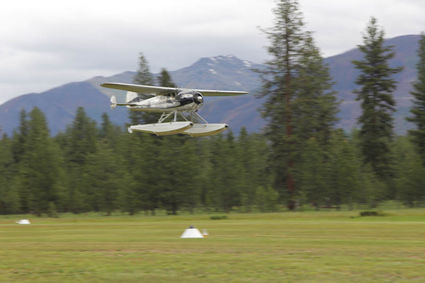 A seaplane does a pass over the runway at Seeley Lake Airport on Sunday, June 17.

SEELEY LAKE - Over the weekend, the Recreational Aviation Foundation hosted a fly-in event at the Seeley Lake Airport to show its support for small, backcountry airstrips in rural communities.

Attendees included local pilots from Seeley Lake and other towns in Montana as well as pilots from Canada and as far away as Atlanta, Ga. Many attended the Airplane Owners and Pilots Association Fly-in which was held in Missoula in the days before.

"Instead of everyone flying in and only seeing Missoula, which isn't really the backcountry, Scott [Newpower], one of the Montana liaisons, said he'd set the whole thing up in Seeley," RAF president Bill McGlynn said.

Bob Thorne provided his hangar for the venue and Mike Lindemer provided food for the event, which included a potato bake dinner on Saturday, June 16 and a pancake breakfast the following morning.

The Seeley Fly-in was important to the RAF because their mission as a non-profit is to advocate for and help maintain backcountry airstrips. Many of the RAF pilots feel strongly about backcountry access and wilderness protection and feel like small airstrips work in harmony with both.

Carmine Mowbray, one of the pilots attending the fly-in and Montana's other liaison to the RAF, said that her passion for wilderness protection is one of the reasons she loves flying her small plane. 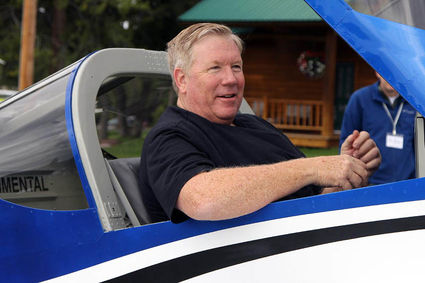 Carl Randolph, Captain at Delta Airlines from Tempe, Ariz., preparing for take-off from the Seeley Lake Airport after attending the Recreational Aviation Foundation's Fly-in Event on Sunday morning. Randolph was flying a RV-14 kit aircraft, which means the parts are available for purchase and pilots can build the plane themselves.

"Yes my airplane makes noise but it doesn't spread noxious weeds. It's not tough on the land," she said. "We value wilderness very highly, we love it, so we want to have access to it in a way that doesn't cause harm."

The RAF helps maintain remote airstrips as well as working with owners of private airstrips to open them to the public. This makes remote backcountry and wilderness areas more accessible to people who are not physically able to hike or ride a horse into them by allowing them to fly over in a plane instead.

"We take people who are unable to do hikes and we give folks an opportunity to see those beautiful sites," Peter Gross said. "Three million people go through Glacier and many of them see no more than what they can see from their cars on the road."

Gross, who runs the charter company Backcountry Flying Experience out of Kalispell, said his goal is to help people see areas they couldn't see from the road or a hiking trail and experience the beauty of Montana.

"Tourism is beneficial financially for us," he said. "But really it's about the satisfaction of seeing a person's face when the view blows their socks off."