Dr. Jack Cohen presents Can YOUR Home Survive a Wildfire? 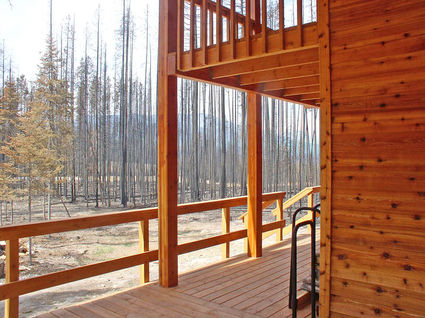 The house still stands after a crown fire made a run within 45 feet of the structure. Dr. Jack Cohen will discuss how and why this is possible at his presentation June 21.

SEELEY LAKE - "Your home can survive a wildfire," is the message from Dr. Jack Cohen, retired research physical scientist from the Missoula Fire Sciences Laboratory. Cohen will share in full detail the results of his years of research at Clearwater Resource Council's Clearwater Partners Workshop Thursday, June 21, 7 p.m. at the Seeley Lake Community Hall. The event is free and everyone is welcome.

Cohen demonstrates through video segments and years of fire lab research that it's not the wall of fire roaring down the mountain that will ignite your home – it's what reaches the area around your home – your defensible space. Nobody knows more than Dr. Jack Cohen about why and how structures burn. He also knows what homeowners can do to make their homes fire resistant.

As we watch the snow recede and the streams and rivers rise in the Clearwater Valley, fire season may seem far in the future. Projections are that as our wildfire seasons become drier, longer and hotter, we'll see more extreme, high intensity forest fires. Last year's Liberty and Rice Ridge fires taught us that it's never too early to prepare.

Cohen said, "What we need to worry about most are the embers that can be carried a mile or more ahead of a fire. These can ignite pine needles in gutters and roof valleys, tree limbs near the ground and dry leaves collected near wooden steps or decks. Homeowners can easily remedy these most obvious ignition points for a wildfire."

Cohen's presentation will include photos and video clips from fires where homes remained unscathed while the forest surrounding burned to the ground. Cohen's videos are remarkably graphic. His research laid the groundwork for nearly all of today's work on wildland urban interface risk reduction.

More recently (2007 – 2016), Cohen conducted theoretical and experimental research that revised international thinking about the fundamental processes governing how wildland fires spread. This research was published in the Proceedings of the National Academy of Sciences (2015).

Cohen has been interested in understanding the wildland-urban (WU) fire problem since the 1970s but he formally started his research on how structures ignite during wildfires in 1989. Using computational modeling, laboratory and field experiments, and WU fire disaster investigations, he identified the limited area that principally determines structure ignition potential during extreme wildfires and developed the home ignition zone (HIZ) concept. He has applied this understanding to create the National Fire Protection Association's "Assessing Structure Ignition Potential from Wildfire" training and Firewise USA program.

Cohen retired from the US Forest Service in 2016 but continues his involvement in developing effective methods for preventing WU fire disasters.