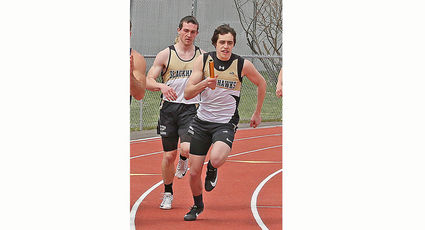 Senior Cameron Haines heads out on the third leg of the 4x100 after receiving the baton from Hunter Shelmerdine. The team, consisting of Haines, Shelmerdine, Logan Robinson and Dakota Wood, took fourth in Missoula with a time of 45.15 seconds and are the first Class C team to auto qualify for state.

MISSOULA - The Seeley-Swan Blackhawks came up against competition from all classes of schools including several Class AA schools last week. They started the week in Corvallis April 10 and then headed to the Missoula County Public Schools Invitational April 14 where more than 1,000 athletes competed.

The Boys earned enough points for fifth at Corvallis propelled by their relay teams that took second in both the 4x100 and 4x400. The Boys' 4x400 time of 3:38.14 is currently the fastest in Class C across the state though it is still three seconds short of qualifying for state.