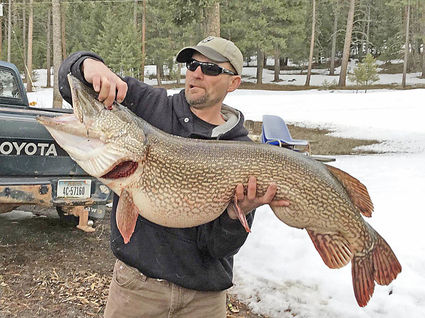 Jimmy Zander pulled this 47-inch, 33.5 pound northern pike through the ice March 26 using a tip-up baited with smelt. If certified, it may set a new record for the lake.

Jimmy Zander of Potomac has been fishing for a "wall hanger" even since he can remember. After his father Charlie got a 24.5 pound northern pike on Lake Upsata in 1996, he's been trying to beat him. The day finally arrived on a solo trip to an area lake after work Monday, March 26. He landed a 47-inch, 33 pound, 8 ounce northern pike.

The first fish on was a four-pound northern pike. After landing that one, Zander looked out and his tip-up was up.

"It was really zinging," said Zander "I set the hook on it and knew it was a big one by the way it was taking the line that fast."

He fought it for about 10 minutes before he got it to the hole.

"I knew I had a wall hanger. I've been trying to get one in the 20s and mount it my whole life," said Zander. "Every time I got a look down the hole it was just black down there." 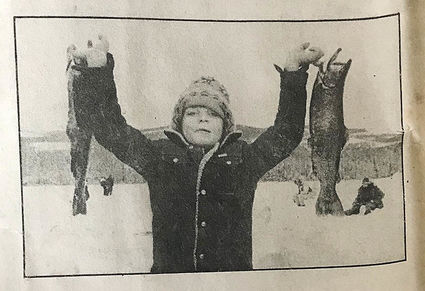 Seven-year-old Jimmy Zander pictured with two, five-pound rainbow trout caught out of Seeley Lake in 1982 while fishing with his father Charlie.

Zander estimated the ice was more than two feet thick. When he finally got the fish's head to the hole, he reached for the gaff. He was able to get both hands behind the head and started pulling it out of the 10-inch hole.

"I kind of laid back and I kept pulling the fish out. It wasn't real easy," said Zander laughing at the memory. "I was squeezing it through there."

"I've been trying to catch one that big for a long, long time," said Zander.

Zander's 11-year-old daughter Jaylee is following in her father's footsteps and keeping up the family's fishing tradition. The trophy pike, that was taken to a local taxidermist and soon will be hanging on the family's wall, sets a high standard for the next "wall hanger."

If certified, his fish could set a new record for the lake on which it was caught.