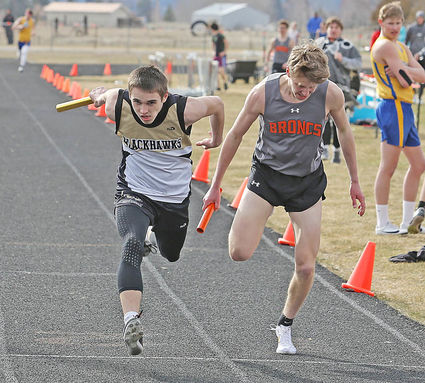 Sophomore Dakota Wood lunges toward the finish line for first place in the 4x400 relay. Wood was several strides behind when he rounded the final corner but gave it his all for the thrilling victory.

FRENCHTOWN - With more than half the team out for spring break and other reasons, the remaining Seeley-Swan Blackhawks still had a great showing at the Jim Johnson Invitational March 29. The Boys took second and the Ladies took fifth out of more that 20 A, B and C class teams.

Nate Samuli earned the Boys only individual first place in the javelin. His throw of 150 feet, 9.5 inches is the second farthest in all of Class C this season and tenth acr...