Choteau Searches for Formula to Stop Loss of Population, Jobs and Students 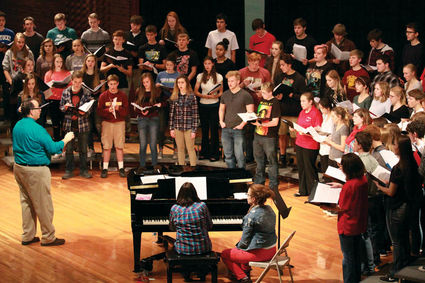 Scott Corey, a former Choteau resident, conducts the North Central Honor Choir in Choteau in November. Corey moved away from his home here to follow a music education career. He is now the coordinator of music and arts for Billings Public Schools.

CHOTEAU – "I'm really into formulas," says Choteau Area Port Authority board member Blair Patton. "People who are successful know the formula. You do not have a successful small community accidentally. There is a focused, purposeful action that leads into that."

Patton returned to his family's ranch outside of Choteau after living many years in Lewistown. He operated a sports clothing and graphics business here, served on the Choteau City Council and now runs a lawn care service. He and his wife raised their family in Choteau, where the youngest of their three children is a junior at Chot...