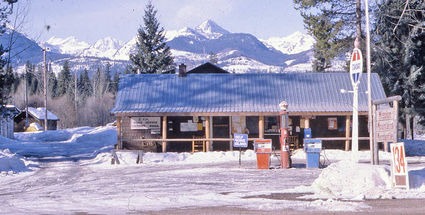 The Mission Mountains Mercantile during the winter of 1980-1981.

In 1979, Len Kobylenski purchased the Buckhorn Camp and changed the name to the Mission Mountains Mercantile. To prove that fact is stranger than fiction – the only document to survive the devastating fire two years ago was the original Buy/Sell Agreement that he had signed. It was found under a pile of charred debris that somehow survived.

Kobylenski was a banker during the 1970s, and spent almost all his vacations out west. He came to Montana from upstate New York for the first time in 1972. He once backpacked from Jaspar Provincial Park to Glacier National Park.

Yearning for the wilds...