Loconte Skates Out with Colorado Avalanche 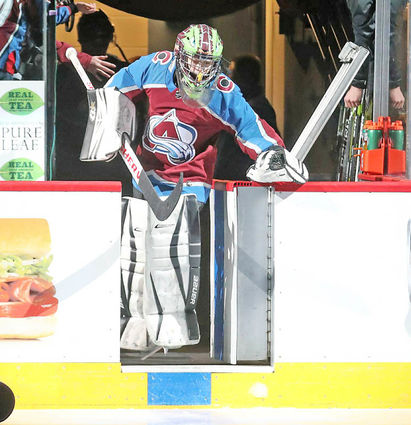 Damon Loconte prepares to step out on the ice with the Colorado Avalanche at their home game Jan. 15.

DENVER, COLO. – When Damon Loconte stepped out on the ice to skate with the Colorado Avalanche, a professional NHL team at their Jan. 15 home game at the Pepsi Center in Denver, not only was he up on the big screen, it was also his first live National Hockey League game. Loconte started skating in Missoula in 2014/2015 while his family lived in Seeley Lake. Now he is playing up an age level in Colorado Youth Hockey and earned the recognition after being nominated by Mike Kolepp, family friend and Remote Technical Manager for Altitude TV with the Colorado Avalanche.

At every home game, the Colorado Avalanche invites a player who is 14-year-old or younger with Colorado Youth Hockey to skate out with them onto the ice. The player is introduced, remains on the ice during the National Anthem and goes home with a jersey.

Kolepp said it is a way to promote youth hockey in the state of Colorado. Not only does Colorado have the Avalanche in the NHL, the University of Denver, Colorado boasts the number one college team in the country in Division 1 Hockey as well as the USA Olympic committee and training center are located in Colorado Springs.

"This is a very competitive area," said Kolepp. "Every [hockey] parent wants their kid to be able to get an education through hockey or get to the Olympics; something to get recognition."

Loconte moved to Colorado last year and hoped to continue playing hockey. He is currently one of two goalies for the Colorado Spring Tigers at the recreation Bantam level, playing with 13 and 14-year-olds when he is only 12. He participates in a weekly goalie clinic taught by former NHL players.

"Damon was moved up due to his skill, maturity, work ethic and size," wrote his mother Beth in an email.

Kolepp nominated Loconte for the chance to skate out with the Avalanche at a home game. Within the week, he was chosen and the family was invited to the Jan. 15 game at the Pepsi Center.

"I wanted to do something nice for Damon," said Kolepp. "For him to come in out of rural Montana and, through his work, get picked up and is playing up in age class, it means he is doing something right. He really enjoys it and he's done a lot with it. It is just another way to encourage him to continue doing what he is doing. Let him get a little bit of recognition." 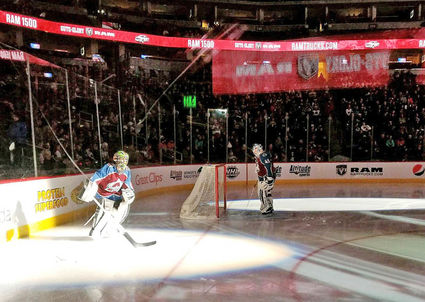 Damon Loconte on the ice with the Colorado Avalanche.

Kolepp made sure the Locontes had four seats to the game, Damon received a jersey and his younger sister Dacia received a gift bag from the team.

"I wanted it to be the best day ever for Damon," said Kolepp. "A lot of kids don't get those opportunities. This was a way to just give him something really, really positive. I hope he still has the smile on his face that he had on his face when he walked out of the Pepsi Center that day."

"It was cool to be chosen to skate with the Avs," wrote Loconte. "The experience made me happy and I was able to watch the goalie which allowed me to learn how to better myself."

Beth wrote, "We are thankful for such a great experience for him and that every person involved from the Av's were amazing and supportive of him."