From Stopping Point to Destination 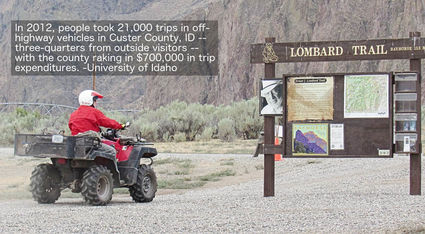 IDPR-Land of the Yankee Fork

Ernie Lombard, the namesake for the Lombard Trail, checking out the information kiosk at the beginning of the Lombard trail at Land of the Yankee Fork. Lombard served on the Idaho Department of Parks and Recreation trails and recreation board. For 25 years he wanted to purchase the old mining town named Bayhorse. Because of his passion for mining towns and off-highway vehicles, he was instrumental in getting Bayhorse Ghost Town opened and connected with trails.

CHALLIS, IDAHO – Mining and ranching is the main economy of Challis, Idaho. When the Thompson Creek Mining Company, a molybdenum mine west of Challis, ended their mining operations in 2014 the bust in the economy rattled the community. At its peak, the molybdenum mine employed around 400 employees accounting for more than half of Custer Counties' tax roll. Today, around 50 remain.

"They were the largest employer but now they are probably the second largest," said Greg Webster, owner of The Bent Rod outdoor store and president of Challis' Chamber of Commerce. "They were like Santa Claus fo...