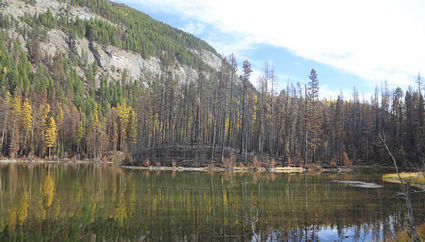 The view to the southeast across Morrell Lake Thursday, Oct. 19. Puffs of smoke coming from a burning stump could be seen on the other side. See page 8 for more photos and story.

SEELEY LAKE – "It's beautiful," said two hikers who were heading back to the Morrell Falls trailhead the afternoon of Oct. 19. The hike into Morrell Falls has been forever changed following the Rice Ridge Fire burning through the entire 2.7-mile trail. Hikers have the opportunity to see areas of high intensity fire where all the crowns were consumed to areas that the fire left untouched and everything in between. Despite the best efforts of the Seeley Lake Ranger District to keep the trail clear, expect to encounter deadfall across the trail.

The suppression activity at both the Morrell and Pyramid trailheads was point protection. Crews removed fine fuels, thinning around trailheads and corrals, and wrapped the trailheads and other structures. Firefighters wrapped the main bridge that crosses Morrell Creek right before reaching the falls. It remains untouched by the fire. 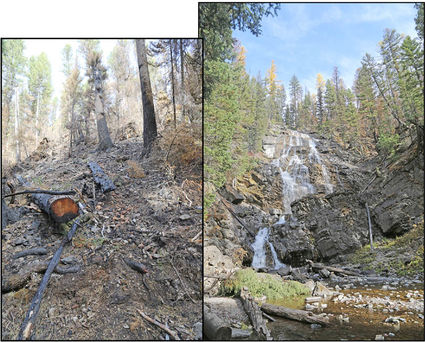 The Rice Ridge Fire burned the understory and torched out a few trees on both sides of Morrell Falls (left). The vegetation right next to the falls is still green.

The trail was mitigated for hazard trees and cleared when Diane Hutton's Type 2 Incident Management Team was still managing the fire. Due to the nature of burned areas coupled with the windstorm Tuesday, Oct. 17 nearly three dozen trees were across the trail Oct. 19.

While the fire torched groups of trees visible from the trail, the most intense crown fire occurred between the pond and Morrell Lake just before reaching the falls.

The fire burned up both sides of the falls. The trail to the upper falls has not been cleared.

The Seeley Lake Ranger District currently has a couple of trail crews working under Burned Area Emergency Response (BAER) funds. They brought in members of the trail crews from Spotted Bear and Rocky Mountain Ranger Districts to assist the Seeley crew. The district is hoping they will complete some spot retread on Morrell Falls Trail and they will clear the trail again.

Katie Knotek, the Seeley District trails manager, said, "It will be an ongoing task of logging out the trails in addition to doing repair work."