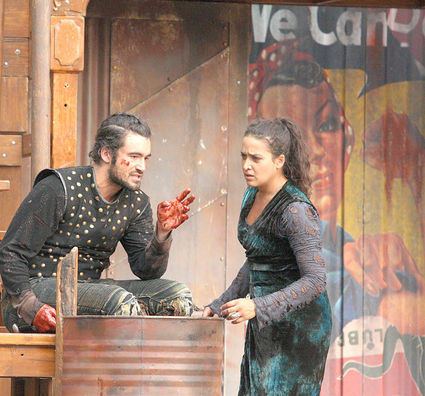 Macbeth has just killed the king and asks, "Will all Neptune's ocean wash this blood clean from my hand?" Note the Rosie the Riveter poster in the background.

SEELEY LAKE – Chuckles rippled through the audience gathered on lawn chairs and blankets at the Double Arrow Lodge grounds when the three witches from Shakespeare's "Macbeth" spoke of scattering into "the fog and filthy air." Yet not even the "filthy air" emanating from the Rice Ridge Fire kept an estimated crowd of nearly 150 from venturing out to see Montana Shakespeare in the Parks' (MSIP) production of "Macbeth" Thursday, Aug. 24 on the Double Arrow Lodge grounds.

That the play would not be a traditional production with the cast in Elizabethan garb became evident immediately as the wa...