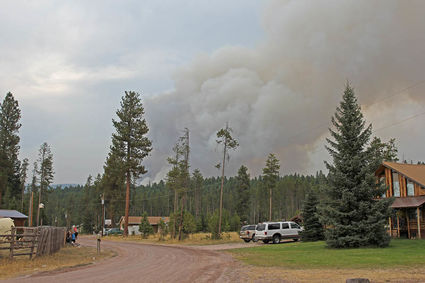 Residents of Elm Drive watch Monday night as the Rice Ridge Fire blew up north of Seeley Lake. An evacuation order for this area began during the community meeting Monday night, Aug. 28.

SEELEY LAKE – The Rice Ridge Fire gained steam this week nearly doubling the acres burned from 16,117 last Tuesday to 30,661 acres Aug. 29. Several more evacuation orders were given during the week and Monday night evacuations were ordered for a large portion of Seeley Lake east of Highway 83.

The fire crossed into the Bob Marshall Wilderness Sunday, Aug. 27 near Devin Peak. It continued to spread north and east through Pyramid Pass and toward Leota Peak on the north and Monture Mountain to the east.

Evacuation Warnings were issued for 15 homes in the Kozy Korner and the Woodworth Area T...