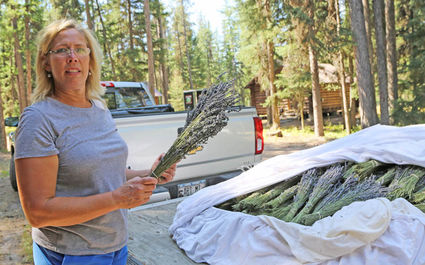 Swan Valley Gardener Grace Siloti pulls out a bundle of lavender that she will distill to extract the oil. She has 1,600 bundles in the bag.

SWAN VALLEY – When a Missoula client asked Swan Valley gardener Grace Siloti to plant three acres of lavender she did not realize the new opportunity it could afford for her and hopefully others in the Swan Valley. Now after her second season, she is reaching the top of a steep learning curve and looking forward to offering lavender oil, hydrosol, buds and stems.

Siloti was one of the pioneer gardeners in the Swan Valley. When she started in 1991 she tried just about everything to see if she could get it to grow. She was able to put her passion for plants and knowledge of gardening to work for Liz Claiborne for whom she created an English garden in the Swan Valley.

One of Siloti's Missoula clients asked her to plant more than 2,000 lavender plants in Missoula.

"[The client] just wanted it for herself so when she looked out the back, she had a big lavender field," said Siloti.

She waters the field once a week during the driest part of the summer but otherwise she just lets it go. She said water kills lavender so it is a great drought-tolerant plant.

Because nothing eats it, there is no need for fencing and it is wildlife-friendly.

"You have to do something with it or it looks awful within a year or two of not being cut back," said Siloti. "So then it was like what are we going to do with all this lavender."

Last year she harvested one or two bundles - a handful - per plant. She began researching how to extract the oil from the lavender, what lavender products were in demand and how to sell it.

Siloti purchased a still and learned the distilling process to produce pure lavender oil and hydrosol, or lavender water. She also learned the best way to dry the plants and then how to separate the buds from the stems and the uses for those.

Lavender produces a gentle, balancing oil. It has a pleasant aroma that has a natural calming effect. Lavender is a natural antiseptic making the hydrosol a good kitchen and bathroom cleaner and it kills mites and bed bugs.

Lavandin oil is good for relaxing and easing sore muscles and joints. It is also anti-viral, anti-infectious and warming. Aromatherapists use lavandin for coughs and colds, as well as to ease anxiety and insomnia. It does not have the ability to help heal burns like true lavender.

"I've been pouring myself into it and trying to learn everything about it all. I've had so much fun," said Siloti. "It was a major learning year [last year] and a lot more work. This year I feel like a rock star."

This year each plant produced five to six bundles. Siloti harvested 1,600 bundles from half the field when the buds just started to open. This lavender will be distilled to make the oil and hydrosol because at that stage of ripening, the lavender produces the most oil.

A week later, after more than half of the buds had opened and were a brilliant purple, she harvested 2,300 bundles from the rest of the field. The second cutting Siloti had eight people working with her. Five of the workers put in seven hours and three people spent 10 hours of cutting and four hours of hanging bundles.

Siloti learned last year that lavender molds very quickly so it needs to be dried properly. While it only takes three to four days to dry, the stems and buds pick up any moisture in the air so the buds need to be removed from the stems soon after they are harvested. The lavender that will be distilled can be stored.

Siloti is able to sell the hydrosol, the pure oil, the buds and the stem bunches. However, the product expires in a year. Part of the learning curve has been making the connections to market the different products.

The hydrosol and oil are sold by the ounce. Siloti estimates she gets about 15 milliliters of oil from each batch and a quart jar of hydrosol.

The buds are sold by the pound. Siloti estimates there is an ounce and a half to two ounces of buds from each bundle. Cosmetic companies purchase the buds for soaps and lotions and there are many culinary uses for the buds.

The stems are loaded with camphor oil, and make a good, aromatic fire starter.

After 26 years of gardening in the Swan Valley, Siloti continues to explore the gardening opportunities. She is growing spearmint, thyme, sage, oregano and lavender on her property just south of Condon so she is not dependent on someone else. 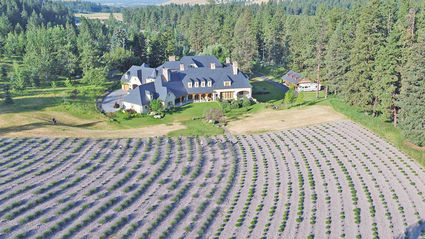 The three-acre lavender field in Missoula that Grace Siloti manages. The group is harvesting the second cutting.

"I'm learning as I go," said Siloti. "You can do a spice mix, or individual [herbs]. I planted a whole bunch of things that you can make oils out of and you can also make herbs. I don't know where it is going to go if it is going to go anywhere, but you don't know until you try."

Siloit's whole goal is not to start her own herb and essential oil business but rather to provide an economic avenue for others to carve out a living in the valley.

"Our valley is dying," said Siloti. "I want to try to get it to where I learn and I know what I'm doing ... see how cost effective it is, what we can do with it and how many young people we can employ. I like being a part of it but I really hope two or three young families that want to work together could take this over and do this."