Once a Firefighter, Always a Family 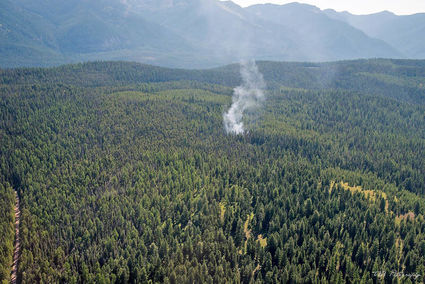 "Those are the fun ones," I thought to myself as I looked at the photo of the Florence Fire sent to the Pathfinder by pilot Scott Newpower the morning of July 19. Those small fires that were less than a couple acres were fun. I put in some long, hard hours of work with incredible folks for a day or two and then we went home and onto the next fire.

I miss it...spending four summers as a firefighter on the Seeley Lake Ranger District and six additional seasons between Minnesota, Alaska and Tennessee. Firefighting got into my blood. I met a lot of amazing people and spent many nights in the dirt with my firefighting brothers and sisters.

That's what firefighters are to me – my family.

That's why I had to go to the Seeley Lake Airport Wednesday, July 19. When I heard my old supervisor on the radio talking about an injured firefighter, I needed to be there. Only now I've traded my Nomex and pulaski for a camera and a media badge.

As I watched the helicopter fly in, it was my brother or sister in that ship. The best medical personnel available were waiting for him/her. Many of them were wildland firefighters and knew the worst case scenario.

I watched as they provided the best medical support they could provide given the situation they were handed.

I watched as the Missoula County Sheriff's Sergeant Bob Parcell sank into the seat of his truck as Life Flight took off. Being an ex-smoke jumper and father of firefighters he was beyond words.

I could have "broken" the story at 6 p.m. Wednesday night, posted a photo on social media that could have gone viral. However I didn't because the only information I had was what I had witnessed.

There were less than 20 firefighters on that fire so it would have created, if nothing else, a panic of texts/phone calls of family members checking on their loved ones.

I didn't know the young man, his family, or even if he was from the Seeley Lake Ranger District or the 10-person crew from Missoula. What I did know was he was my brother and family to those there that day. All I could do was pray for a miracle and hope that I didn't get a press release in the morning that said he didn't make it.

Grayback Forestry said in a press release, "As the crew was getting lined out, a top broke out of a burning tree towards the crew boss and three others. Trenton Johnson was struck by the snag."

Every decision will be questioned, every action relived over and over but hindsight is 20/20 and the end result is still the same.

Wildland firefighting is a dangerous job but firefighters don't think about it that way. They train rigorously both physically and mentally and go out day after day into hazardous situations and do the best job they have been trained to do. We can only hope that the lessons learned from this incident will help with that training.

We've all been there, been in a similar situation or watched a close call. That's how firefighters build our "slide show," our range of experience that helps us make the best decisions possible under pressure. Why did we get to go home at the end of our shift and Trenton didn't?

No investigation will explain the why and nothing can soothe the raw reality of his absence...Trenton Johnson, I never met you, but you were my brother.

I grieve for his family, his crew and those up on the hill with him that day.

Once a firefighter, always a family.