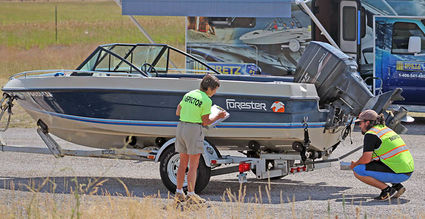 Inspectors check a watercraft at the Clearwater Junction Check Station.

SEELEY LAKE – A silver Toyota Tacoma towing a blue and white striped motor boat pulled up to the check station at Clearwater Junction.

Two inspectors circled the watercraft, checking for the presence of zebra mussel of other aquatic invasive species (AIS) that could infest local waters.

Where did you last launch this boat? Where do you plan to launch next? And most importantly, have you taken this craft on any waterways known to be infested?

A series of answers, the latter being negative, followed and another boat was given a green light to continue.

Richardson said that the check station inspects around 100 boats a day on weekdays, and between 250 and 300 on weekends.

One catch is that the check station is only mandatory for boats driving in from the west-any other direction and drivers can bypass the station-but Richardson said that the system "seems to be working."

This partially mandatory check station-located six miles from the nearest lake-is greatly contrasted by the system put in place in Whitefish. There, boaters, kayakers and other watercraft recreationists who visit Whitefish Lake are met with a strict protocol before they are allowed to launch.

Since May 1, all boats intending to launch in Whitefish Lake must undergo mandatory inspections at the two public boat launches. Onsight inspectors man the check stations during the day, and at night the launches are physically closed off.

"To me that's the gold standard," said Joann Wallenburn of the Clearwater Resource Council. "Every boat is going to be looked at."

Whitefish Lake makes a few exceptions to the rule. Local non-motorized boaters (think kayaks, canoe and paddleboards) who are regulars on the lake can take a tutorial and exam that allows them to streamline the inspection process.

Similarly, motorized boats that leave the lake will be 'sealed' as they leave-if they return with the seal intact, they will have an abbreviated inspection.

"Is it foolproof? No, but it's the closest to foolproof that we can reasonably get to," said Wallenburn.

A hundred miles south, in the chain of lakes that dot the Seeley-Swan Valleys, the same standard is harder to implement.

There are five lakes in the area with seven public boat launches. Two are operated by the state, five by the Forest Service.

Manning mandatory inspection stations at all seven launch sites would require a huge investment. Wallenburn estimates that fully trained inspectors would cost slightly more than $24,000 per launch-paying minimum-wage monitors would cut that down to around $15,000.

Deciding who would foot the bill is one issue.

"When you have this mixed ownership and mixed level of agencies-federal, state and local-it just gets really messy," said Wallenburn.

In Minnesota, Wright Country recently implemented a country-wide mandatory inspection law-essentially the same standard that Whitefish Lake has. The program there is expected to incur an annual cost into six figures but could turn eyes across the country towards Minnesota as the new Gold Standard.

Wallenburn is already looking toward the Midwest state for inspiration.

"If you look at any state that has mussels and look at a graph over time... it's an ever increasing graph because you never uninfect the water," she said. "It just keeps growing and yet theirs has almost flat lined and they have 10,000 lakes."

Here in Montana, more money and attention is being turned to AIS prevention every year. This year, the Montana legislature passed a bill requiring all anglers to purchase an AIS prevention pass in addition to their fishing license. The pass is estimated to bring in an additional $3.2 million a year to help Montana combat AIS.

Until a stricter standard is put into place around Seeley and the surrounding lakes, Wallenburn will continue to be concerned.