Up, On and Over 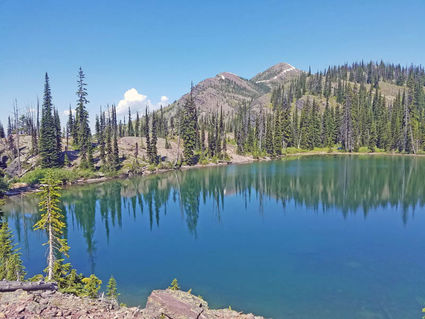 Difficulty: Pass and Lake, 4/10. Peak 6/10-both for duration. (1 being a stroll through the park, 10 being technical climbing or of excessive duration)

Overview: The hike from the parking lot to the pass is a five-mile climb, with plenty of switchbacks to avoid getting too steep. At mile 4.7 you will reach an unnamed lake that has some great spots for camping, eating lunch or getting to the water for a swim. Beyond that lake, another half-mile of hiking will take you to the wilderness boundary of the Bob. Beyond the wilderness sign, there are two side trails that lead to Pyramid Lake. Both are unmarked and fairly easy to miss-if you go more than ¾ of a mile past the boundary you've gone too far.

Once you reach the lakes, ascending the peak is straight forward. Circumnavigate the lake until you reach the talus field on the other side. Pick a point on the ridge and start climbing.

The quickest way to get to the ridgeline is to stay as far left as you can. Once you are out of the rock fields and onto the ridge it is an easy walk to the top of the peak.

Note: Pyramid Peak still had some snow on it in July. Snow visible from the valley will be encountered along the route.

SEELEY LAKE – After living in Seeley for more than a month, I decided this week that it was time for me to finally get into the Bob Marshall.

On the Sunday before the Fourth of July, two of my cross country teammates from UM came up to Seeley, enticed by my proposition to traverse four peaks in an afternoon.

After looking over the map, I decided that by going up Pyramid Pass it would be possible to link up Devine Peak, just south of the pass, with Pyramid, Marshall and Crescent Mountains.

We set out mid morning with this goal in mind. We took off on the trail to Pyramid pass, buoyed by the sign at the trailhead that (incorrectly) told us we only had four miles to hike.

After a few miles of walking through fields of bear grass, we picked it up and ran the rest of the way to what we thought was Pyramid Lake.

It turns out there is a string of two lakes before you reach the actual pass. I think the first unnamed lake is by far the best in the area- perfect temperature for swimming and a nice view of Pyramid Peak in the distance.

Once we reached the pass, and the sign announcing we had reached the Bob Marshall boundary, we took a moment to review our plan. We threw out the idea of starting with Devine peak, figuring that if we stayed north of the pass we had a better chance to link up more peaks.

Our one mishap came shortly after, as we headed down the trail from the boundary and ran straight past the side trail that takes you to Pyramid Lake. Thankfully, it only cost us a half-mile before we realized our mistake, and we soon found ourselves on the shores of a pristine alpine lake.

We only took a moment to entertain thoughts of swimming before we took off in pursuit of our first goal: Pyramid Peak.

The peak is easily accessed from the lake- a quick traverse around the shore and we were at the base of the mountain. It took less than an hour to scramble up the shale fields, ascend the ridgeline and hike/glissade our way to the towering high point. Pyramid Peak stands at 8,309 feet and offers a stunning view of Seeley Lake and the Mission mountains to the west, and the first couple ranges of the Bob Marshall to the east.

It was this second view that intrigued us most. Several points down the ridgeline from our peak, was another, taller peak of rust colored stone. A quick map consultation told us it was Leota Peak.

Another shift in our plans-it turns out that to ascend Crescent Peak we would have to drop more than 1,500 feet from our route... not something that sounded appealing.

Instead we began to traverse the ridgeline, scrambling across more shale fields and avoiding random useless high points to tag Marshall Mountain, at 8,270 feet.

At this point we had been on the trail for nearly five hours. One of my buddies was getting to the end of his 'fun zone.' He was hiking with me for the first time and was unaccustomed to what my college roommate and I termed "adventures," and most people call lunacy.

He was quickly swayed, or at least subdued, into giving Leota Peak a chance. It looked to be about two miles away by undulating ridgeline, a task we attempted to simplify by descending off the ridgeline and traversing through a beautiful fire-thinned pine forest.

Walking through a dead forest provided a tranquil, almost eerie feeling. With the added shadow of clouds frequently blocking the sun it was, as one buddy put it,"the time in the movie where the bear attacks."

Fortunately, the most we saw of a bear was a few tracks.

Instead, when we finally reached the top of Leota Peak, we were granted one of the best panoramic views I have ever seen. Leota sits about three miles inside the boundary of the Bob Marshall, so everywhere you look there's a mountain beckoning.

We left Leota Peak at 5:20 p.m., seven hours after leaving our car. The plan, according to my expert map reading skills, was to descend straight down the west face until we found the main trail that led to Pyramid Pass. It seemed an easy task-the perks of burnt forests include good visibility and minimal bushwhacking. 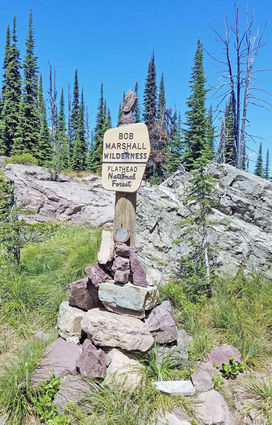 Unfortunately, my route-finding skills are not as good as my map reading skills. We descended too far to the right of our goal. It took a solid half hour of creek crossing, log leaping and bush bashing before we literally stumbled onto the trail.

Once we knew our location, direction and had a solid surface beneath our shoes, we started our slow jog out of the Bob. It took us two miles to reach the pass and the string of lakes. At this point, diving in was not an option but a necessity.

The last five miles of descent from the pass went by quickly, albeit with frequent stops to take pictures of various alpine flowers.

Nine and a half hours after setting out, with three peaks in the books and 19 miles covered, we were done. Dusty, hungry (only two apples apiece plus some almonds were packed) and sore, we piled into the car and drove back to Seeley, Taylor Swift blasting through the radio.