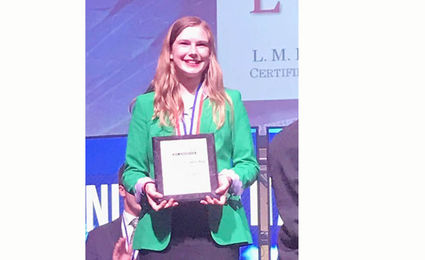 Mallory Philliber took second place in Fundamental Accounting at the Business Professionals of America National Competition in Florida in May.

POTOMAC - Potomac resident and Hellgate High School senior Mallory Philliber made her mark in the world of Fundamental Accounting earning second place in the nation at the Business Professionals of America National Competition.

The BPA is part of an education program with the goal of developing competency in business occupations and leadership abilities in the American business system.

"The BPA club is about making business fun, teaching students about business ethics, accounting and how businesses work specifically in America," Philliber said. She holds an officer position of bookkeeper with the Hellgate BPA.

Within the state of Montana there are 379 high schools. More than 100 of those schools offer BPA as an inter-curricular activity for students in addition to Hellgate.

Hellgate's BPA chapter has more than 40 students in the club. A majority of the students went to regionals in Missoula in January. Eighteen made it to the state competition in Billings in March. Eight continued on to the BPA Nationals in Orlando, FL in May. Two of the top three national winners were from Montana.

Philliber said it was really cool that Hellgate had such a strong showing as did the state of Montana. Not every state has a BPA chapter so there were only 26 states represented in Florida.

This year was the first time Philliber competed for the BPA. "I really like BPA because of the people," said Philliber.

Philliber joined the BPA because she liked her teacher Beth Huguet and wanted to take more of her classes. "I wanted to meet new friends and learn about what other people do [in the BPA]," said Philliber.

Preparation for the competitions include a student-run retail store during school hours where the students experience business. "In addition to the mini retail experience we learned what goes on in the world, did community outreach and had fun meeting people around the state," Philliber said.

In the national competition, Philliber had a 90-minute test completed in a classroom setting. "Some things on the test were hard," she said. 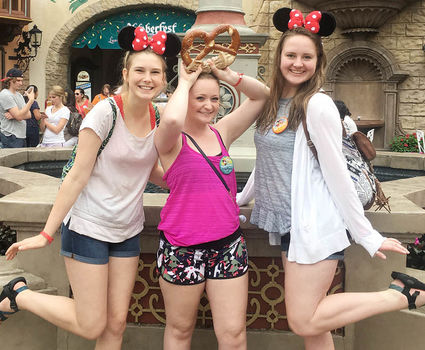 Mixing business with pleasure in Florida at the Business Professionals of America National Competition in May. Mallory Philliber, Courtney Smith and Francie Lorenzen are officers in the BPA chapter at Hellgate High School in Missoula.

Philliber placed second out of more than 60 students competing in fundamental accounting. The test was judged on score and time. The competitors were only made aware of their ranking.

Other sections of the BPA competition included presentations and team events.

Regarding her accomplishment, Philliber said it will look good on future resumes. "It is a nice thing to have done," she said.

Philliber is grateful for the support from the Potomac community, local businesses, non-profits and Huguet.

"She's got our backs," Philliber added.

Philliber can't compete in fundamental accounting again but is looking forward to next year's learning   the BPA.

"I am not sure I will go into business but I think it is important learning about numbers and running a business," said Philliber. "Business and the BPA sounds really boring but it is interesting and teaches life lessons."