Dirt Biking in the Snow 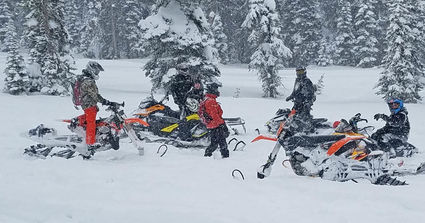 The two machines in the forefront are snow bikes – dirt bike bodies with a single ski in the front and a narrow track in the rear.

Snow biking is gaining popularity among winter enthusiasts in Potomac. Snow bikes are able to go in timber where snowmobiles cannot due to their shape and agility. Most snow bikes are interchangeable into dirt bikes with a special kit and a lot of patience.

Snow bikes are different than snowmobiles. Under the dirt bike body, there is a single ski in the front and a narrow track behind, versus the double skis on snowmobiles.

"Some snow bikes are interchangeable and can be switched back to a dirt bike for summertime," said Chris Goldade, a Potomac resident who snow bikes and dirt bikes. Dirt...