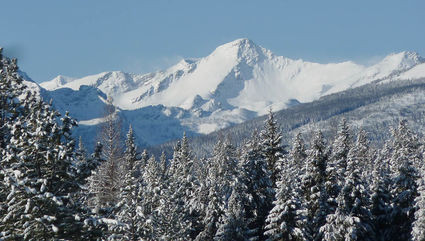 In 1964 a Baker's Chocolate tin was found on Mountaineer Peak (center) that contained a glass bottle that had the names of the crew that explored the Mission Mountains in 1922.

SWAN VALLEY - Nearly 50 people packed into the Swan Valley Museum Friday night to hear local author of "Swan Valley Place Names" Steve Lamar tell how some landmarks around the valley received their names. Lamar explained that many of the landmarks were named by the 1922 survey crew members who explored and later mapped which in now the Mission Mountains Wilderness. Events in residents' lives also became the names of the places where they happened.

Trapper and prospector Jim Condon's name is very familiar in the Swan Valley. He was in the valley in the late 1800s to early 1900s. According t...