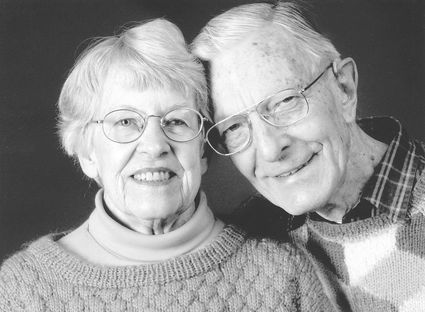 SEELEY LAKE - Marion Burmeister nee Schmutz was born New Year's day 1927 in Queens, N.Y. to Anna and Walter Schmutz.  She was raised with her brother Bob in Queens, N.Y. where she graduated from high school a year early.

Marion was a secretary in Manhattan, taking the crowded subway from Queens to the office. In 1947 she met Charles Burmeister and they were married in 1949. In 1950 she became a mother with the birth of her son Stephen.  In 1953 she had her second son Roger.  In 1964 they welcomed their youngest Ann when they adopted her from South Korea.

Marion and Charlie moved to Doylestown, Pa. in 1961 where Marion began to refine her lifelong love of the arts. She painted many beautiful landscapes in scenic Bucks County. She was also a voracious reader and later in life became a writer and poet. Marion learned to play the organ and had a beautiful singing voice.

Marion and Charlie moved to Big Sky, Mont. in 1974 to fulfill their dream of living in the west.  They invested in a Hostel at the Big Sky ski resort. Marion learned to ride a horse and she and Charlie had many adventures touring the west from Canada to Texas.

They retired to Seeley Lake in 1987 where they had many friends and were involved in the community.

Marion had so much creativity spilling out of her that she couldn't be constrained to only one artistic medium.  She used oil paint, watercolor, pencils, charcoal, pottery, needle point, lithography, silk-screening, sewing and even basket weaving.  There was always a knitting basket close by with a sweater being stitched for some lucky person. She created tea sets, dolls, doll clothes, paintings, tablecloths, potholders, Christmas ornaments, bowls, cups, vases and quilting blankets... so many blankets. Marion's pottery became very popular and she sold many pieces across the Swan Valley. As Marion began to lose her memory her art is what she missed the most.

Marion was a creative woman, a caring grandmother and a loving mother and will be missed by us all.

There will be a Memorial to Marion this summer in Missoula, Mont.