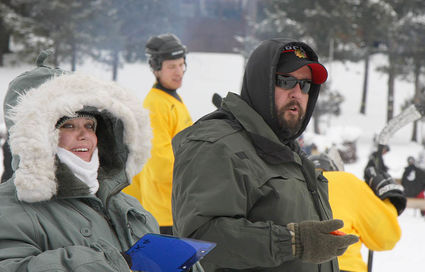 Rachel and Jesse Schrock dressed for the weather and tried not to get so caught up in watching their first pond hockey tournament that they forgot their duties as scorekeeper and timer.

SEELEY LAKE – Over a seven-year period, what started as an opportunity for friends to play broomball on Seeley Lake has grown into an officially sanctioned Pond Hockey Tournament. The Jan. 6-8 event featured four playing rinks and 44 competing teams. The tournament's Volunteer Coordinator Lynn Mitchell said, "Without our volunteers, it would not happen."

From top to bottom, the event is run by unpaid workers. At the top of the volunteer roster is Event Coordinator Megan Lindemer. Her duties include sending out announcements of the event and handling subsequent correspondence with the team...