Maracujá Due to Heat Things Up 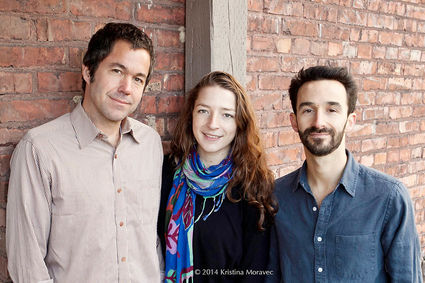 SEELEY LAKE - To combat a cold January winter, Alpine Artisans' performing arts branch 2 Valleys Stage is bringing the community a mixture of fiery Afro-Cuban and Brazilian music courtesy of the band Maracujá. The Maracujá trio blends guitar, percussion and vocals to produce music for dancing, music for listening, music to bring a smile. Their repertoire includes everything from samba-funk, bossa nova and bolero to Cuban son, an amalgamation of Spanish song forms with Afro-Cuban qualities.

Maracujá will be in Seeley Lake for a public concert Sunday, Jan. 8 at 3 p.m. in the Seeley Lake Community Hall. A change of venue from the usual Seeley-Swan High School location was necessary because of continuing construction on the high school stage.

Though all three Maracujá musicians were born in the United States, each felt drawn to the pulse of South American and Cuban music and invested time and energy learning about the music and cultures of those places.

Caitlin Belem grew up in northern Wyoming in a house full of music. She fell in love with the fiddle at a young age and continued with saxophone, guitar and singing through private lessons, school groups and with her parents.  She has explored many genres from Brazilian bossa nova and samba, to Cuban son, to American jazz, blues and swing.

She moved to Brazil and studied Brazilian culture, music, and Capoeira Angola, which is both a music and martial arts form that accesses the roots of early Brazilian life and history. Through a grant from Oberlin College, Belem went on to study music and culture through the Portland based Cuba AyUUda, a program whose stated mission was to "enable U.S. citizens to develop lasting friendships with Cuban people." In addition to performing with Maracujá, Caitlin sings and plays with the band At Five and with various other local and traveling musicians.

Guitarist Terrence Rosnagle was born in Pasadena, Calif. He has traveled extensively to learn, play and perform different world music.

Initially self-taught, taking his inspiration from delta blues and rock and roll guitarists, Rosnagle's interests later switched to the Spanish guitar and world music. He studied flamenco guitar in Spain with private teachers, classical and South American guitar with the Chilean maestro Eulogio Davalos in Barcelona, and Brazilian guitar styles with Steve Erquiaga at the Jazz School in Berkeley, California. Rosnagle moved to Buenos Aires, Argentina, to study folkloric guitar, and to Istanbul, Turkey, to study Turkish classical music and to learn to play the ud, a stringed instrument similar to the medieval lute. Terrence has performed professionally in the United States, Spain, and Turkey.

Sam Esecson grew up in Southern California and began studying drum set when he was eight years old.  He moved to the Pacific Northwest after high school to attend the University of Puget Sound and be near Seattle's vibrant music scene.  Because he was enamored with Afro-Cuban and Brazilian music, Sam twice traveled to Brazil to study percussion and soak in the culture.

Esecson has performed with dozens of bands, touring extensively throughout the USA, Canada, Mexico and most Western European countries. Esecson also teaches private drum and percussion lessons in Seattle and on the Eastside.

An enthusiastic audience member of a Maracujá concert reported, "Maracujá is a one-of-a-kind trio which brings joy, spirit and soulful music to any venue.  They have it all!  Unique Latin rhythms, musical excellence and easy rapport with the audience. Just sharing a space with them is a heartwarming experience. We can't wait for their next concert!"

Welcome to Seeley Lake then, because Maracujá's next concert is Sunday, Jan. 8 at 3 p.m. at the Seeley Lake Community Hall!