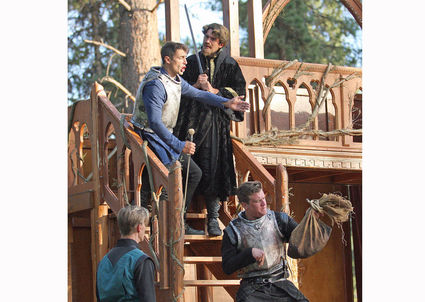 In Montana Shakespeare in the Parks' production of Richard III, Richard holds the severed head of Hastings whom he had just ordered killed. At the same time, Richard and his co-conspirator tried to convince the mayor (top, in black) that Hastings was plotting against the king.

SEELEY LAKE – An estimated 250-300 people set out their chairs and blankets on the Double Arrow Lodge lawn Aug. 26. Gathered in a semi-circle around the portable stage, they awaited the Montana Shakespeare in the Parks' (MSIP) production of Richard III.

Not considered one of Shakespeare's most famous plays, Richard III presents a number of staging difficulties. For one thing the unabridged play has an overlong run-time. Though Shakespeare compressed 14 years into five conspiracy-packed acts, the play still requires slightly more than three hours run time. In addition the play has a large...