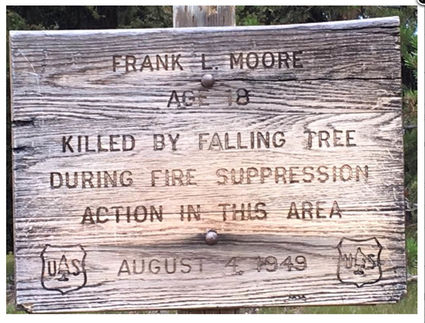 This sign is posted on Rice Ridge in the place where Frank Moore was killed Aug. 4, 1949.

We've recently lamented the tragedy of Justin Beebe, a wildland firefighter member of the Lolo Hotshot Crew who died while fighting a fire in Nevada. A falling tree killed Beebe, 26, who had been with the crew just seven months, on Aug. 13, 2016.

Falling snags have been a firefighter killer ever since the beginning of wildland fire suppression.

Seeley Lake has its own story about a similar tragedy almost 70 years ago about six miles as the crow flies up Rice Ridge.

Frank "Stubby" Moore was killed there in 1949 while fighting a forest fire. It was at night, someone yelled a warning that a sn...