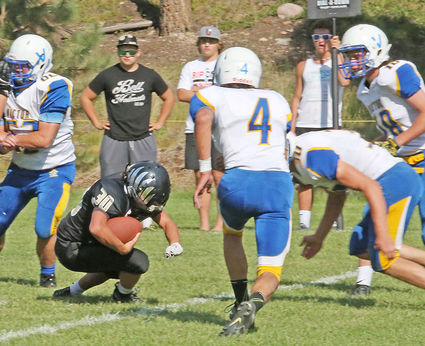 Freshman Avery Smith ducks into the end zone for the JV Blackhawk's first points of the season.

VICTOR - The Seeley-Swan Blackhawks headed to Victor to take on the Pirates Aug. 27 for the opening game of the football season.

The Pirates showed no mercy as they handed the Blackhawks a 6-58 loss.

The Blackhawks' lone touchdown came on a 60-yard pass to Hunter Sokoloski from Shane Lindemer.

"We weren't as bad as the score would indicate," said Blackhawk Head Coach Ryan Sokoloski.

Coach Sokoloski explained that most of the mistakes were fundamental type mistakes, missed tackles and blocks being the biggest issues.

Coach Sokoloski said the team had some issues playing together as a team....