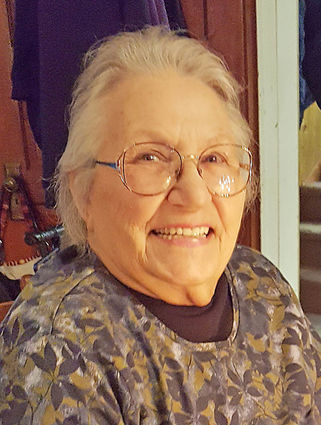 She was born April 24, 1934 at the Thornton Hospital in Missoula, Mont. to Arnold H. Case and Annabelle (Rehder) Case of Potomac, Mont. She was raised at her parents' cattle ranch 25 miles east of Missoula near Potomac.

She attended grade school at what was then a one-room schoolhouse in Potomac through the seventh grade, attending Bonner school for the eighth grade. She graduated from Missoula County High School (now Hellgate), graduating in 1952. Four years later she graduated from Montana State College (now Montana State University) at Bozeman, with a bachelor's degree in home economics.

Following graduation she worked as an Associate Home Demonstration Agent at the Flathead County Extension Office in Kalispell until 1958, when she married Glenn A. Hacker in Missoula July 12, 1958. They lived in Missoula from 1958-1972. Then the family moved to and remains on the Case Ranch following the death of Julie's dad (Arnold H. Case).

In Missoula, Julie was active in the Camp Fire Girls (CFG) organization and a member of the CFG Council in Missoula as well as a member of the Priscilla Circle of the Presbyterian Church. Later, she created the Missoula County Freeholder's Association and lobbied at the State Legislature for property owner's rights and against increased taxation.

Finally, she spent many happy years as a passionate and prolific quilter and produced innumerable quilts, many of which were given to children, grandchildren and friends.

Julie is survived by her loving spouse of 58 years, Glenn A. Hacker; their five children Annabelle Hacker of Missoula, Mary Hacker of Anchorage, Alaska, Joanna Gutierrez of Paradise, Calif., George Hacker of Phoenix, Ariz. and Donna Hacker of Potomac; and her brother Arnold J. Case, of Portland, Ore.

A Remembrance Service will be held at 4 p.m. at the Case Ranch Saturday, Aug. 20. An open house will be held with light refreshments to follow until 6 p.m.