Hanging Up Her Apron After 23 Years of Cooking for Students 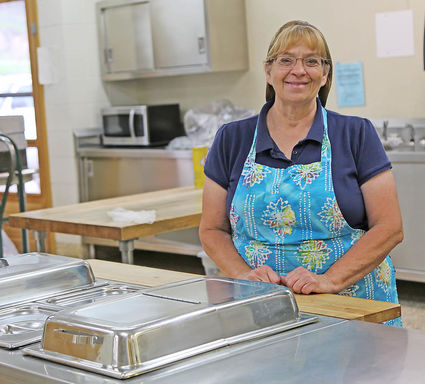 Seeley-Swan High School Head Cook Connie Betson's last day was June 9. She said she will miss the students the most.

SEELEY LAKE - After 23 years as head cook at Seeley Swan High School (SSHS), Connie Betson is hanging up her apron. While she will miss the students, she is looking forward to travelling and having more time to do the things that she enjoys.

Betson ran a day care for nine years. When all of the children she cared for were going into first grade, she saw it as an opportunity to try something new.

"When the job became available at the high school I thought it was something I would enjoy doing," said Betson who had cooked at several local restaurants. "I like to cook. I like to bake. And I love to be around kids."

In August 1993 Betson was hired as SSHS's head cook. She followed in the footsteps of Head Cook Ethel Hoehn and Assistant Cook Esther Farra who had been in the position for 18 years.

With the exception of some pre-cooked foods, Betson made as much food as she could from scratch. She baked all her own bread and pizza crusts, cooked hams, turkeys, and roasts and made her own pizza sauces.

"I just want to do something and make the kids happy and be there as a friend," said Betson.

Betson said that study hall used to be held in the cafeteria. If the students had a problem or just wanted to chat, they would come into the kitchen and sit on a little stool "and tell me all their problems. It gave them someone to talk to that was different than their parents or a counselor if they just needed to get some stuff off their minds."

Now that study hall is no longer held in the cafeteria, Betson still touches base with the students if they look down or frustrated when they come in for breakfast.

Betson worked from 5:30 a.m. – 1 p.m. every school day. While there has never been a salad bar at SSHS, lettuce and other vegetables, sometimes from the greenhouse, have always been on the line so students could make one if they chose. She loved that the students had gotten comfortable enough with her to request certain dishes.

"Because it's a small school, it's nice to be able to accommodate those things where a larger school doesn't have that luxury," said Betson.

Even though Missoula County Public Schools (MCPS) started requiring all the schools to go to the same menu plan in the early 2000's, Betson still worked with the students as much as she could.

"I've always kind of done my own thing," said Betson. "[For example], if the sports kids or coaches come to me and said that something didn't work well if they are going to be running [like tacos]; I always tried to change it if I could."

The national directive from the Presidential wife Michelle Obama changed the amount of calories and what kinds of food Betson could offer. Prior to Obama it was serving different amounts of food such as a cup of vegetables or two to three ounces of protein.

"We have to be really careful what we serve and it all has to equal out to not over 800 calories for everything offered at lunch," said Betson.

MCPS went through Betson's recipes and assigned each food item or dish a calorie count. Then she is able to mix and match based on those numbers.

"For example, if I wanted to make French fries with something, I just need to make sure I stay within the calorie count," said Betson. "So I'd eliminate something else that is higher in calories like dessert."

This change eliminated Betson's ability to serve her legendary cinnamon rolls a couple of years ago. She made it a tradition to make it for the seniors on the last day of school.

Another change during the Obama administration has been that 51 percent of the meal has to be whole grain. Betson adjusted to this by making her bread with half wheat and half white flour instead of just white flour.

Betson's last official day was June 9. Although she's into summer break mode, Betson knows she will miss the students the most this fall. She fondly remembers one of her student helpers who put Dawn dish soap into the dishwasher.

"Suds were coming out of the dishwasher. It was coming out the cafeteria door. It was running out the back door," said Betson. "We had suds everywhere! That's the kind of stuff that I remember."

Another story was the food fight in the spring of 1996 that ended the outdoor barbecues for almost four years. Betson decided to cook burgers outside the cafeteria. Inside the students had an all out food fight just as Principal Kim Haines brought the MCPS School Board for a tour.

"I had set up a table for the school board with flowers and there was food all over it. There was food on the walls, all over the ceiling, the tables, it was everywhere," said Betson. "I walked in later and one of the girls was cleaning the table with a mop. It was such a disaster."

Although barbecues have been brought back, Betson now is in the cafeteria with the students while cooking.

In her retirement, Betson will be making fishing lures with her husband in their home-based business, Tackle the Waters, LLC and she will be travelling. She thinks the freedom to travel whenever they want is what she will enjoy the most.

Betson said, "Thank you to the students for being so great. They were so polite and would say thank you. I appreciated that they appreciated us."