Work Hard and Don't Give Up 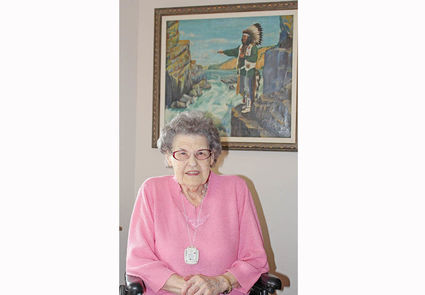 Centenarian Queveene Talley in her Kalispell, Mont. retirement home apartment. Her first husband Archie Clothier painted the picture of Chief Charlo near the location where the Kerr dam was built on the Flathead River.

SWAN VALLEY - Former Swan Valley resident and centenarian Queveene Talley reached one hundred years of life March 16, 2016. She has outlived her siblings many of whom lived into their 90s and two of her three children. Talley's response when asked how she has lived so long: Hard work, luck, believing that things will get better when things were hard and not giving up.

Talley was born in Kalispell, Mont. in 1916. She was the fourth of seven children born to Walter and Hattie Aleatia Colby who came to Montana from the mid-west to homestead in Montana.

Talley said if she had been a boy, her parents were going to name him Q.T. She said that was a popular saying in the early 1900s. "Isn't that awful. Just having initials for a name," she said. She said she didn't know what Q.T. meant, "I suppose a person would have to Google it." She said her parents made up her name from those initials.

When she was 85 years old, Talley wrote a booklet about her life for her family called "The Life and Times of Queveene Talley". She told of her memories of growing up, marrying and coming to live in the Swan Valley.

Talley said her first memory is when her sister Marie was born after they had moved to Kila, Mont. when Talley was four years old. Her sister was born in her Grandma Colby's home in Kalispell. "I remember getting a plate full of fudge from Grandma that day to share with Vera (her sister)," said Talley.

"I grew up as a tomboy. I helped with the farm work, milked the cow, pitched hay, cleaned the barn and hauled water and firewood." said Talley.

Talley rode to school at Kila in a buggy driven by her older brothers and in winter they used a sleigh. She said one time around Christmas her brother George put a string of bells around one of the horses. The strap came undone, slapped the horses' legs and they had a run-away through town. The horses finally stopped at the barn where they were kept during the day.

Talley said the Kila kids came out to their place to enjoy outdoor activities included horseback riding. They sledded and skied on homemade equipment in winter and in summer rode down a hill in a narrow gauge railcar loggers had built that ended at a pond. They used a two by four for a brake. They slid down a log slide on a piece of fir bark into the pond. She said that she is still in touch with some of the friends from the Kila area.

Talley remembers going to Kalispell to a fireworks show. When they were climbing Somers Hill in the old Model T, it couldn't pull the hill and keep the lights on. She said it was an adventure to all to get out and hold the lantern so her father could see to drive.

Talley went to high school in Kalispell where she and her sister rented a room from a family. Her dad hauled wood to pay the rent.

"He took us in on Monday and picked us up on Friday when he hauled freight to the Kila Mercantile," said Talley. "I remember what my Home Economics teacher always said, 'Treat your family like you would your friends as your family is the only one that really cares about you.'"

Talley attended high school in Kalispell for 2 1/2 years. She married Archie Clothier on July 14, 1933 in Polson, Mont. They lived in Kalispell, Lakeside and Polson. During that time her children Valgene and Nancy were born.

In the fall of 1938, she said they had saved some money so they bought a half section of Northern Pacific Railroad land in the Swan Valley at Salmon Prairie with Archie's brother Babe Clothier. They built a log cabin from dry logs which she said were lighter and easier to manage. They chinked between the logs with mud and moss to help keep the weather out.

Since they didn't have a car, they ordered their supplies which were delivered twice a week from Swan Lake to the Salmon Prairie schoolhouse a quarter mile away.

A log bridge over the Swan River connected the family home with Archie's brother Babe's place. One time Talley was returning a cream separator back to Babe across the bridge and her young daughter was following behind with a cat in her arms. Her daughter fell through where a log had rotted out, landed in the river and clung to a huge rock. The cat was gone but Talley managed to rescue her daughter. "We were both scared witless and wet." she said.

They built a larger house four years later, raised a garden and put up hay with the help of a neighbor Bob Fox while Talley's husband worked in Kalispell.

Archie died of blood cancer in February 1947. Talley had to sell her property to pay debts. She moved to Kalispell to work at Woolworths on Main Street. In July she packed cherries. "I didn't get rich, just tired." 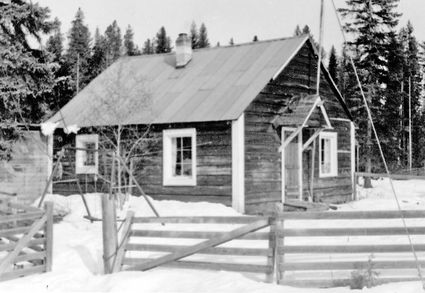 Talley lived in several Montana towns, visited Spain where her daughter lived and in 1969 decided to move to Alaska where her son Val lived and where her daughter had recently moved. She worked as a cook in a rest home. In 1971 Talley married Glenn Talley, an ironworker, in Anchorage. They traveled around the United States, spent time in Mexico, lived in Washington state where they built and sold three houses and finally settled in Kalispell. Glenn passed away in 2009. She moved to a Kalispell retirement home soon after.

Talley's friends and family had a 100-year birthday party for her at the retirement home this March. She talks to visitors in her retirement home apartment and talks nearly every night with a nephew who lives in Kalispell. "We laugh and gossip," she said.

She said that looking back she has some regrets about things she did and didn't do that would have made life different. "I guess that is true of all of us," she said.