The Path to Now

Part I of III - The Pathfinder Turns 30 - This begins a 3-part series on the history of the Seeley Swan Pathfinder. 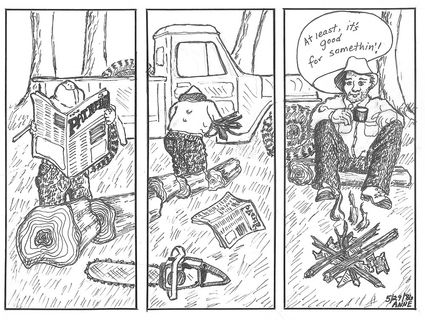 This editorial cartoon drawn by Anne Dahl appeared in the second issue of the Seeley Swan Pathfinder. While the cartoon suggests loggers might find the new newspaper of no more use than as fire starter, it also hinted at the trepidation the new owners felt, wondering if their new venture would be valued by the residents of the valleys.

SEELEY LAKE – An anniversary is a time for remembering the beginning, for looking at then and tracing the path to now. As the Seeley Swan Pathfinder prepares for its 30th Anniversary Celebration June 25, it seems appropriate to revisit the when, how and why of the Pathfinder's beginnings.

Condon resident Suzanne Vernon said that in 1986 fate matched her and her husband Sheldon with former Seeley Lake residents Dick and Michele Potter to create a weekly newspaper. Though another paper, The Valley Times, was already in existence, its purpose as stated in its first issue in 1983 was "to be of service, entertainment, and interest to the residents of the valley." The Potters and Vernons envisioned a newspaper that would put more focus on problems and issues. It would feature a provocative editorial column and encourage reader response.

Suzanne Vernon, who holds a journalism degree from University of Montana, wrote in an email, "I was the one with the passion for the news in the paper and with the background to know how it should be put together. My husband knew photography and quickly learned the halftone process. He took care of anything technical and took most of the photos. The Potters knew the business end. Michele did all the ads. Dick took responsibility for the opinion page and also did all the financials, the paperwork for the corporation, the computer setup, the spreadsheets and advertising tracking systems."

Vernon said, though the group decided their inaugural publication should come out just prior to Memorial Day, work on their first issue began in March. The Potters proved their business acumen by signing up 44 advertisers for the paper's debut plus 16 businesses for a Business Directory section.

Vernon hired graphic designer Jerry Sprunger from Bigfork to design a logo. Brainstorming sessions had settled on "The Seeley Swan Pathfinder" as the name for the newspaper. Pathfinder not only carried echoes of James Fennimore Cooper's book of that name, it also described how the two couples felt about their venture.

As Vernon put it, "We were breaking trail or finding a new path through a lot of things."

Sprunger drew a silhouette of a person wearing a knapsack and carrying a walking stick. He sketched mountains and trees in the background and curved the word "Pathfinder" in capital letters above the silhouette. The words "Seeley Swan" he placed in title case lettering, small enough to fit across the top of the first three letters of Pathfinder. The inaugural issue also carried the words "Voice of the Valley" centered beneath the silhouette.

The front page carried a boxed column titled "Who We Are..." It introduced the new newspaper, identified the Potters and the Vernons as the owners and gave a little of their backgrounds.

Dick Potter's opinion column on page two gave a more detailed explanation of the new enterprise and the reason for its existence: "We believe that this newspaper is making its first appearance at a time when the community has arrived at an important crossroads.... Many complex issues lurk within the dynamics of our community's growth.... "If we are at a crossroads, then the question arises as to how to find the best path to travel. We at the Pathfinder do not presume that our name alone bestows some special ability to navigate through this thicket of issues and problems. Only the community as a whole can chart its proper path through the democratic processes of communication, debate and, ultimately, consensus."

The opinion column went on to explain the owners believed the Pathfinder's role was to present the facts surrounding all sides of an issue and to offer its Letters to the Editor and Opinion columns as a forum for the public to discuss and express their views.

The first issue spanned 16-pages. Along with local news, school happenings, an obituary column (later named Swan Song) and a classified section called The Finder, the newspaper gave an extensive report on the position of candidates for various Missoula County offices. It also re-published a letter from the Montana Outfitters and Guides Association dealing with lawsuit concerns and it carried a lead story about a proposed survey to gauge the concerns and wishes of the people in the valley.

The inaugural issue presented two other columns that would become regular features: Michele Potter's "Cornucopia" and Suzanne Vernon's "Country Journal." Potter had a degree in Home Economics to back her column that featured recipes and practical tips. She wrote that she chose Mexican Eggs for her first recipe because of the symbolism of eggs as new life, new beginnings.

Vernon's "Country Journal," consisted of short observations about nature and wildlife in the valley: "...The glacier lilies can still be seen blooming in the higher elevations... One young snow goose, probably a juvenile, stopped over to rest at Holland Lake Lodge the first part of April before the ice went off the lake."

In her email, Vernon said, "I wrote all the articles in those first few weeks. I didn't feel I needed to put my byline on the news articles, only on Country Journal and on the feature pieces."

Another weekly column that began in the Pathfinder's first edition and is still a part of the paper today was Passages. From the beginning, Passages provided a platform for the various churches of the valley on a rotational basis.

The cartoon Natty Bumppo, signed simply Anne and the date, appeared in the second issue and continued for many years after. Not until the Pathfinder's first anniversary issue was it explained the name of the principal person in the cartoons, Natty Bumppo, was named after the hero of James Fennimore Cooper's "Leatherstocking Tales" series, the third book of which is "The Pathfinder." In that same anniversary issue the creator of the cartoon was revealed to be Anne Dahl of Condon.

In July of 1986, The Pathfinder bought out The Valley Times. In 1987, Seeley Swan Pathfinder was officially accepted as a full professional member of the Montana Newspaper Association. In the same month they received a second class mailing permit, a feat Dick Potter describes as being, "readily comparable to that for licensing a nuclear power plant."

Another hallmark of which Suzanne Vernon is particularly proud is that the Pathfinder was the second newspaper in the state to use desktop publishing. 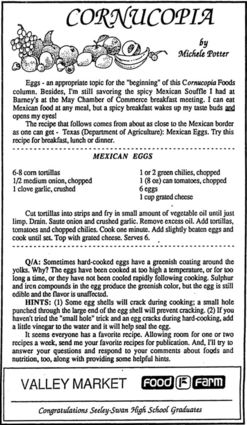 Although the two couples remain proud of their accomplishments, Vernon wrote in her email, "People today have no idea the work that went into creating the business! We worked 24/7 for almost three years. There were no weekends, no holidays, no vacations. We had two small children.... We threw all of our savings at the newspaper project, and honestly, by 1988 when we sold it, Sheldon and I felt we barely came out of it alive! We had invested $10,000 in equipment (for our own computers, a laser printer and darkroom/pressroom equipment) and Potters did the same. None of us partners drew any income out of the paper for the first six months, and after that we started drawing only a minimal amount. We were exhausted. In 1988 we decided to sell the paper."