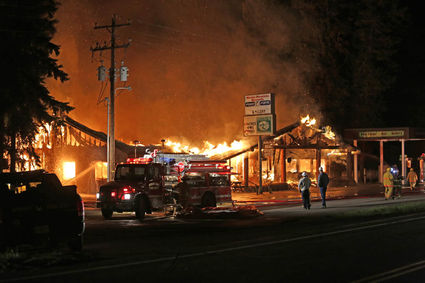 Volunteer firefighters from Swan Valley and Seeley Lake work to contain the blaze that destroyed the Mission Mountains Mercantile in the early morning hours of May 18.

SWAN VALLEY - The Mission Mountains Mercantile was destroyed by fire in the early morning hours of May 18.

At approximately 12:22 a.m. a fire was reported at the Mission Mountains Mercantile on Highway 83. The Swan Valley Fire Department was dispatched to the scene. A short time later assistance was requested from the Seeley Lake Fire Department.

When fire personnel arrived on-scene the blaze was towards the back of the gas station, but quickly moved to the front of the structure. The building was eventually fully engulfed. Volunteers worked though the night and were still there when the sun came up.

The structure has been determined a total loss. The fire marshal is en-route to investigate and determine the cause of the fire.