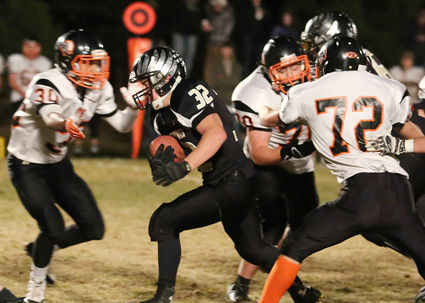 The Seeley-Swan Blackhawks wrapped up their season hosting the Plains Horsemen Oct. 23.

The Blackhawks found themselves trailing early in the game as the Horsemen completed long passes and made big plays when they needed. Plains took advantage of an interception near the Blackhawks end zone to gain a 12-point lead.

The Blackhawks had a better second quarter, scoring early on a 6-yard pass from Shane Lindemer to Bradley Miller. The teams traded touchdowns throughout the quarter but by halftime the Blackhawks had cut the deficit to just 4 points.

Jacob Haley was first to strike after halftime taking in his third touchdown of the game and giving the Blackhawks the lead. The Blackhawks kept one step ahead through the quarter but continued to be plagued by the Horsemen's passing game as they headed into the fourth quarter. 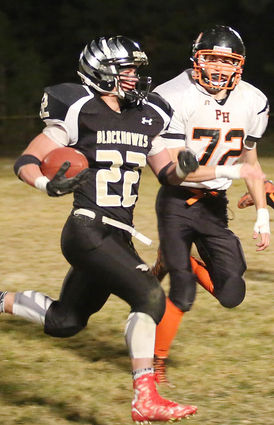 Completing their seventh touchdown pass midway though the fourth quarter, the Horsemen closed in on the Blackhawks and were able to overtake them with one final touchdown as the game came to a close. The final score was 50-54 in favor of Plains leaving the Blackhawks with a 2-6 record for the season.

Haley led the Blackhawks, rushing for 260 yards on 34 carries and scoring 5 touchdowns in the process. Gavin Mercado scored for the Blackhawks on one of his 8 carries while Lindemer rushed for 59 yards on 9 carries.

Joshua Cahoon received 3 passes for 37 yards while Miller caught 2 including one for a touchdown.

On the defensive side, Matt Teague and Lindemer each were credited with 7 tackles while Seth Linford had 1.5 sacks. James Webb had a solo sack for 15 yards lost.

Lindemer had the Blackhawks' only interception and knocked down two passes.

It was senior night for the Blackhawks. See page 9 for coverage of the nine players and one manager who were recognized ahead of the game.